Villagers who would be affected by CIDCO's Navi Mumbai Airport Influence Notified Area (NAINA) pilot project allege that they were not informed about the same. Authorities say they will not go ahead with the project without the villagers' approval 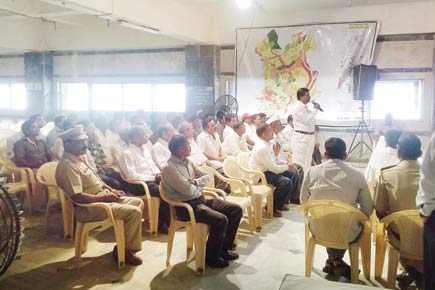 With the proposed Navi Mumbai Airport Influence Notified Area (NAINA) pilot project receiving strong objection from people residing in 23 villages which would be affected by it, City and Industrial Development Corporation (CIDCO) officials on Saturday said that they would not go ahead with it, unless the Project Affected People (PAP) give their approval. 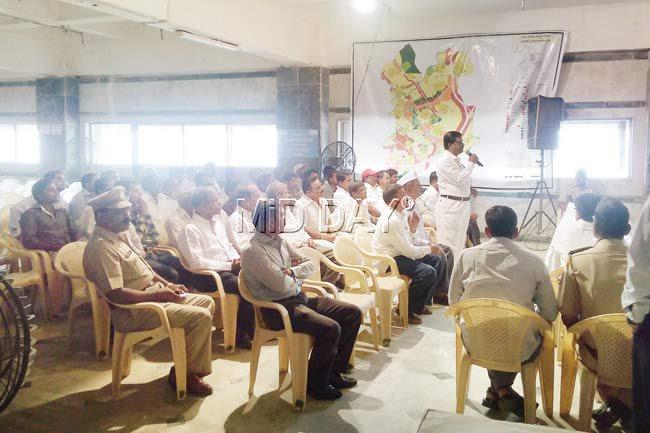 On Saturday, people from the 23 villages which will be affected by NAINA pilot project, met CIDCO officials. Pic/Ankoor Anvekar

People from Pali Khurd and Nere village expressed their discontent with the proposed project yesterday. They wanted an explanation from CIDCO about why they were not informed about the same while a survey for the project was being undertaken.

Villagers not informed
Spokesperson for the 23 villages, RD Gharat, told sunday mid-day, “CIDCO did not bother to inform us about the project or the survey. As the project will affect agriculture, the sole source income of the farmers will be destroyed.”

Anant Mankame, a villager from Nere village, said, “Justice will be served only if CIDCO once again starts from the ground level by approaching farmers for the project.”

Official speak
After Saturday’s protest, CIDCO’s Managing Director, Sanjay Bhatia, said, “It seems that many villagers were not fully aware of the project. Hence, I will send a team to these villages by next week, so that our officials can explain and discuss the merits of the entire pilot project to the residents. We will not go ahead with the NAINA project until the villagers give their approval.”

Next Story : Kalyan IS recruit in NIA custody till Dec 8