The robbery takes place at Axis Bank ATM at Nalasopara during cash transfer activity. Armed miscreants snatch the bag of cash and flee in a car 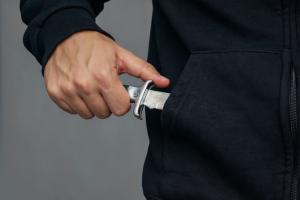 
Nalasopara: In an audacious daylight heist, two masked miscreants decamped with Rs 38 lakh from an Axis Bank ATM, located in Nalasopara east on Tuesday evening. The thieves also assaulted the security guard who was depositing the money in the ATM and fled the scene of the crime in a car.

According to the police, the robbery took place at around 5 pm at Axis bank ATM situated at Gaurai Pada area. When three persons including the security guard from the cash handling company reached the location in a cash van to refill money in the ATM, two masked miscreants arrived and one of them held the guard at gunpoint. However, the bullet loaded in the gun fell off and the other thief hit the security guard with a rod after snatching the bag of cash. They fled from the scene towards a waiting Wagon R car, which had no number plate and drove away. The injured security guard is recuperating in a local hospital.

An FIR has been registered at the Tulinj police station after which an official rushed to the spot and began investigating the matter. Initial investigations suggest that around Rs 38 lakh cash was stolen and four persons were involved in the robbery, two were seated in the car while the other two masked robbers stole the money from the loading company employee and injured the security guard.

The police are also scanning the CCTV footage installed in and around the ATM centre as well as nearby shops to identify the accused. Meanwhile, the local crime branch have traced the car to Bilal pada area in Nalasopara east and efforts to identify the owner is underway, an official said.