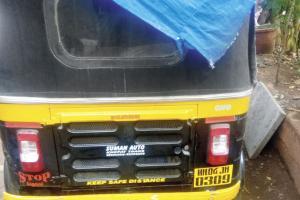 The vehicle that was used in the thefts


A gang of three chain-snatchers must have thought that a new modus operandi would help them escape the eyes of the police. Unfortunately for them, their attempts failed miserably, with one of them even getting arrested on June 8. On receiving complaints of three similar incidents, in which a trio travelling in an auto-rickshaw snatched gold chains from morning walkers, the Nehru Nagar cops traced one of the accused to Naupada and also recovered the vehicle used in the crime. The main accused and one of his associates are still at large.

According to the police, on May 31 a woman from Chembur filed a complaint at the local police station that an auto-driver snatched her 10-gm gold chain while she was out for a morning walk in the wee hours. On June 1, two similar cases were reported from Nehru Nagar in which 20-gm and 5-gm gold chains were snatched. As the modus operandi and the timing of the incidents were similar, the cops suspected a single gang to be committing the crime.

Additional Commissioner (East Region) Lakhmi Gautam had instructed all the local police stations to keep a close tab on the movement of the auto used in the crime after they recovered its details from CCTV cameras near the spots where the incidents took place. The Chembur, Nehru Nagar, Govandi and RCF police stations had increased their surveillance to nab the chain-snatchers. "After we got the registration number of the vehicle from the CCTV footages, we checked with the regional RTO, from where we got the owner’s number. He told us that his auto had been stolen between May 30 and 31 and that he had filed a complaint at the Kashimira police station," said a police officer.

Another officer said, "After we got the first clue about the vehicle, we started checking its route. Based on a technical analysis and inputs from informers, we picked up a person from Nuapada. He has been identified as Mohammed Zuber Sheikh, 32. He was accompanying both the other accused during all the incidents. The trio used to snatch chains, sell them off and divide the money to buy drugs."

Police sources said that the main accused had developed the modus operandi. He thought that it would be difficult for the cops to identify them if they used an auto-rickshaw instead of a bike.

"The offence was a serious one as the accused were targeting morning walkers and even managed to snatch three chains on consecutive days. We have arrested one person in connection with the crime. The others will be nabbed soon," said Gautam.

May 31
Day the cops received the first complaint