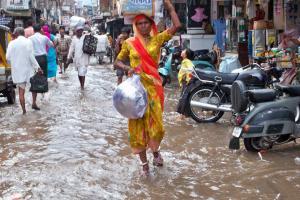 
Pre-monsoon showers have already begun in Thane, but the civic body seems unprepared for the heavy rains expected to lash the city by the third week of June. The Thane Municipal Corporation sprays medicines across the city every year to prevent the spread of mosquitoes that causes filaria, malaria and other diseases.

The TMC, which was supposed to complete the spraying projects before monsoon, has not even issued the tender to start the work even though the previous contract expired 10 months back, alleges social activist Kedar Dighe.

"Since past one year, there has been no medicinal spraying in Thane city area. No one was bothered in summer because there aren't many mosquitoes then. However, with monsoon on the way, there will be a sharp increase in mosquitoes which is very likely to lead to several diseases," Dighe said. He added that they have requested the TMC commissioner to issue the tender soon.

Dighe also complained that drainage extension, road repair and nullah-cleaning works are still underway. "The TMC contractors have still not finished most of the works like drainage extension and road repair, which will cause immense inconvenience to the residents during monsoon," he added

TMC spokesperson Sandip Malvi said, "Our tender is in process and soon we will complete all health-related spraying in the city within a month." He said the delay was caused by the general elections which ended on 19 May.

Dighe said the TMC will be held responsible if it fails to take the measures required to ensure the residents aren't hit by any mosquito-borne diseases.

Next Story : Mumbai: Bad roads this year, too at Aarey Colony