After animal escapes and kills one woman and injures another villager in Pandharkawda, Forest Department sends it back to Tadoba National Park; other elephants might also return to Madhya Pradesh due to issue there 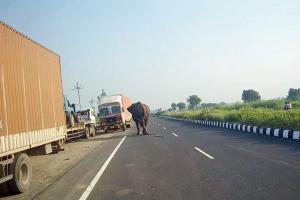 The elephant seen on the highway on Wednesday


While forest department officials were busy trying to trap tigress T1 in Pandharkawda, an elephant, ironically one of those brought to capture her, escaped and headed to a nearby village, killing a woman in its path. The woman was working near her house in Ralegaon taluka early on Wednesday, when the elephant attacked her. It then ran on to the highway and injured another villager. Forest department officials had a hard time capturing it. The incident took place at Chahand village in Ralegaon taluka near Pandharkawda. The woman who lost her life was Archana Kulsange, 30.

'Probe how it escaped'
The sarpanch of the neighbouring Wedshi village, Ankush Muneshwar said, "It's a very unfortunate event, and the forest department should investigate how the elephant left the location, and ran towards the village killing the woman who was working in a field." Villagers said that the elephant left the base camp around 6 am and ran towards their village. 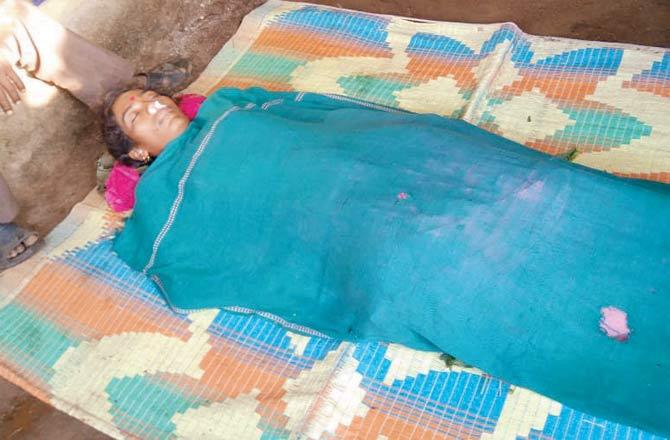 Archana Kulsange was attacked while she was working near her house

After killing the woman it also damaged her house. Following the incident there is an atmosphere of tension between the villagers and the forest department. The elephant was brought from the Tadoba National Park to capture the tigress and her two cubs. Four other elephants have been brought for the same from Madhya Pradesh's forest department.

"As was her daily routine, the woman was working near her house. Suddenly the elephant came running, picked her up with its trunk and slammed her on the ground resulting in her death. The angry elephant then ran on to the highway. Fortunately it was captured by the forest department," added Muneshwar.

A structure damaged by the elephant in the village

Official speak
Chief Conservator of Forests, Yavatmal, Pradip Rahurkar said, "The elephants were chained at night at our camp site. Even we don't know how this elephant escaped. But we managed to capture him. We are questioning the grass cutter and the mahout how he escaped. The elephant has been sent back to Tadoba."

A forest department official said, "It is a very unfortunate incident where a woman of Chahand village lost her life in a human-elephant conflict incident and another person of Pohana village was injured in the incident. Investigations into how the elephant, Gajraj, left the base camp and reached the village are in progress, and an enquiry has also been ordered. The elephant was also spotted running on the Hyderabad-Nagpur highway." It is also said that the same elephant had injured a person in March too after it escaped.

Two vets go back to MP
In another development, the veterinarians have returned. CCF Pradip Rahurkar said, "The two veterinarians from MP have returned as there was an issue there. There are chances that the four elephants might return too, but we are requesting they be kept here for some time. We are confident of capturing T1 soon. Maharashtra's four vets are already here, we are also using drones to find the tigress."

Also Read: Four elephants brought in from MP to hunt for tigress T1, her cubs