Doctors have sent blood samples of two dogs for testing and hope the blood group matches with that of injured Marshall, who belongs to Shiv Sena corporator Ujwala Phadatare; it had been run over by a school bus and lost about half a bucket of blood

Two-year-old Marshall, the Rottweiler belonging to Shiv Sena corporator in Thane, Ujwala Phadatare, is now awaiting a blood donor, after being run over by a bus on Monday morning. MiD DAY had reported (‘Sena men smash buses after corporator’s dog is run over’, January 14) on how a school bus, belonging to Rainbow Preschool and Laurel Public School, Thane had driven over the dog, which bolted out its owner’s apartment building at Khewra Circle.

Doctors have sent 2 ml blood samples of Fighter (inset) and Tasha to the lab, to see if their blood groups match with that of Marshall (above). Pic/Sameer Markande 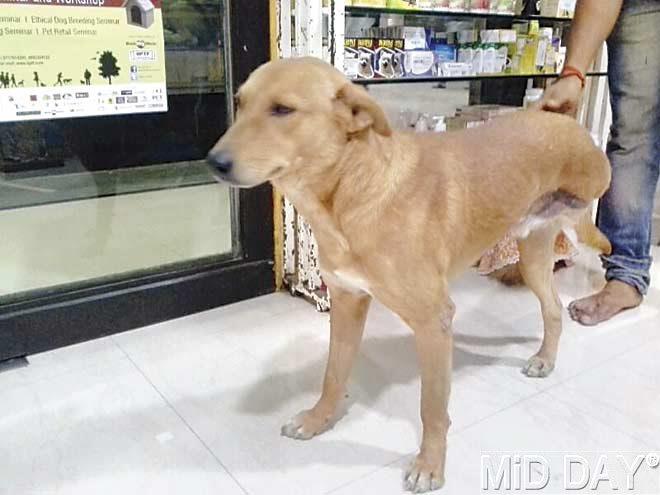 Shiv Sena men, led by the corporator’s son Nilesh, had allegedly smashed the window panes and windscreen of the school bus in reaction to the incident. Both parties (the men and the driver) had been booked under relevant sections of the IPC by the Kapurbawdi police. The dog, whose face was crushed, had lost a lot of blood and was admitted to Planet Animal Hospital on Ghodbunder Road, Thane.

According to the treating veterinarian Shashank Kamble, he suffered a bilateral mandible fracture and is said to require close to one litre of blood, as the blood loss has weakened the animal severely. The hospital is now looking for blood donors for the beast. Till now, blood samples of two dogs - named Tasha and Fighter - have been taken and sent to the testing lab.

MiD DAY’s report on the incident

Fighter is a street dog adopted by Dr Kamble himself. If the blood group matches with that of the victim, a transfusion will take place on Thursday. However, since canines have 13 blood types, a mismatch could be a cause for concern. Vets also hope owners of more canines come forward to get their pets’ samples tested.

First operation
On Monday evening, the dog underwent the first surgery, in which a wire was used to fix his jaw. Dr Shashank Kamble, from Planet Animal Hospital, said, “In the first operation, we used a wire in order to fix the dog’s jaw. Now in the operation that will be performed on the dog on Thursday morning, a German steel plate would be used to fix the jaw. We have kept Marshall on drips, saline and antibiotics so that he does not get dehydrated and his injuries heal faster.”

The operation to fix the steel plate would be done in Kandivli, where Marshall will be taken to on Wednesday. The surgery will be performed at Dr C C Wakankar Clinic in Kandivli. Dr Wakankar calls it a complex operation, “Such dogs are not very easy to handle. Since the fracture has occurred on both sides of the jaw, bringing it together will be tough and complex.” The dog is being fed milk and fruit juices through an inserted stomach tube. Phadatare, the corporator, said that bringing the dog home soon would be difficult because of this. “We are hoping he recovers soon though,” she said.