Aishwarya Rai Bachchan posts school photograph. Can you spot her?

Aishwarya Rai Bachchan has literally left social media in a tizzy. The actress has posted some throwback pictures, and identifying her is a big task, as she looks drastically different from what she looks now 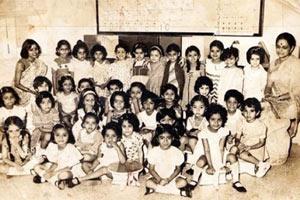 Aishwarya Rai Bachchan forayed into the digital world a few days ago. Ever since she has been on a photo-sharing spree through the medium, and we aren't complaining! The gorgeous beauty posted a few pictures from her school days, to be precise from lower kindergarten and grade first. Well, spotting her is a tad difficult.

Aishwarya Rai hasn't revealed where she is sitting in the photograph. The global girl posted two photographs and captioned the first photo as, "LKG Times (sic)."

A post shared by AishwaryaRaiBachchan (@aishwaryaraibachchan_arb) onMay 20, 2018 at 6:00pm PDT

A post shared by AishwaryaRaiBachchan (@aishwaryaraibachchan_arb) onMay 20, 2018 at 7:54pm PDT

The entire Aishwarya Rai fan club is busy locating her in the throwback pictures. Some even suggested that she highlight herself in the picture with a coloured mark.

However, we think in the LKG photo, she is in the last row, sixth from the right side. In the first grade picture, she is in the second row, sitting on teacher's left side.

The 44-year old actress recently returned from Cannes Film Festival. She was accompanied by her daughter Aaradhya and mesmerised everyone at the red carpet with her fabulous fashion choices.

Aishwarya Rai Bachchan's first post was with her daughter Aaradhya as a baby. The gorgeous diva shared her first post with pieces of a grid picture that completed a collage of her holding Aaradhya in her arms when she was just a tiny tot.

The pic was unpretentious and made everyone emotional as it expressed the bonding between a mother and her child. As we all know that Aishwarya is a doting mother to Aaradhya, this image clearly shows the emotional side of the actress.

On the professional front, Aishwarya made dazzling appearances at the Cannes Film Festival and will be seen in Fanne Khan with Anil Kapoor and Rajkummar Rao. She will also be seen in the film Jasmine, and reportedly in the remake of Woh Kaun Thi (1964) with Shahid Kapoor and Raat Aur Din (1967).

Talking about it to mid-day, Aishwarya said, "After I was given a narration of Jasmine, I requested the team to rewrite a few things. So we'll see where that goes. Woh Kaun Thi and Raat Aur Din remakes are fabulous ideas. Once I return from Cannes, I will sit down with the team and understand how they want to remake the films. Only then will I take a call."