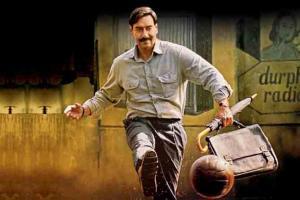 
In January, mid-day had reported that the makers of Maidaan were building a makeshift stadium in the western suburb of Mumbai to film football sequences for the drama, which is based on the life of football coach Syed Abdul Rahim. Three months since, the set — that reportedly set the makers back by over Rs 7 crore — wears a desolate look minus leading man Ajay Devgn or the 100-odd crew that was to shoot at the venue.

A source from the creative team informs that the producers had rented over a dozen acres of the plot for two months, with shooting slated to begin on March 21. However, they called off the shoot on March 16 in the wake of the industry shutdown. "Amit R Sharma [director] was to shoot the last schedule, which focused on all the football matches that will be shown in the film. The set was complete with toilets, make-up rooms and a PCR [production control room] in place. With the set standing unused, there will be a considerable financial setback."

The model of the makeshift stadium

If the lockdown is extended beyond May 3 and runs into June, the outdoor set faces another threat in the form of monsoons. "If exposed to rains, the set will need a complete overhaul. Plus, the schedule requires foreign actors and technicians. Their availability will depend on the condition in their countries. Coordinating everything will be a logistical nightmare."