Ananya Panday gears up with a dual avatar for her films

Donning two distinct avatars for her films Student of The Year 2 and Pati Patni Aur Woh, Ananya Panday has piqued the interest of the audience with her varied looks 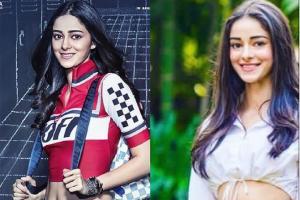 
Ananya Panday is setting the ball rolling for Bollywood with her first release Student of The Year, the actress, however, has already bagged her second film and has completed the first schedule of the same. Donning two distinct avatars for her films Student of The Year 2 and Pati Patni Aur Woh, Ananya Panday has piqued the interest of the audience with her varied looks.

Ananya Panday will be seen as the uber stylish chic of the college in her debut film 'Student of The Year', while in her second film 'Pati Patni Aur Woh, the actress will slip into the character of a girl next door.

Sporting cool tracks and hoodies, Ananya Panday is the latest kid on the block as she plays a student in her debut film. Graduating further, Ananya will be seen as the love interest of Kartik Aaryan in her second film.

A regular amongst the paparazzi, Ananya Panday has generated immense buzz ahead of her first release. Ananya Panday has bagged multiple endorsements even before her silver screen debut. After a remarkable appearance at the coveted talk show Koffee With Karan, Ananya has just added to her fandom with her bubbly, outspoken and honest personality.

With Student of The Year and Pati, Patni Aur Woh, Ananya Panday promises diverse characters with varied traits of her personality.