Funnily enough, in school she was an athlete who had a fear of public speaking and was completely detached from the glamour industry. 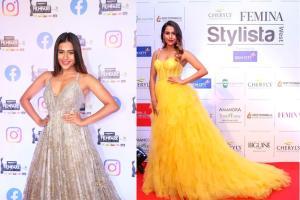 The fifteenth of last month saw living, breathing shining stars walking amongst mere mortals at the
fabulous 65th Filmfare Awards. The ripple of anticipatory energy was palpable as it was glamorous.
Working the red carpet was Angela Rebello – hostess extraordinaire. This was the third time for her at Filmfare Awards. Cruising smack dab in the middle of a dreamer’s paradise, Angela couldn’t help but feel inspired. Recalling a few of the interactions, Angela says, “Taapsee Pannu is a natural charmer and super friendly. Ayushmann Khurrana is so grounded, and not so surprisingly, a perfect gentleman. Oh, Varun Dhawan is always high on energy and fun. His aura is always super-charged.” Angela has rubbed shoulders with the likes of Amitabh Bachchan, Aamir Khan, A.R. Rahman, Aishwarya Rai Bachchan, Priyanka Chopra, former Brazilian Footballer Ronaldinho, and many prolific personalities over the years in her career circuit.

The latest cherry on top of her achievements was hosting the glamorous event of Femina Stylista West 2020. The venerated jury consisted of actors Rakul Preet Singh and Sanya Malhotra, Dr. Nitin Dhepe – Medical Director of Skin City, Tanya Chaitanya – Editor and Chief Community Officer of Femina, and Dr. Madhu Chopra – Managing Director of Studio Aesthetique. Dr. Chopra was quoted congratulating Angela’s work, “Angela, you really handled the event very well. Not for one minute I felt the energy drop. You kept me engrossed throughout.”

Funnily enough, in school she was an athlete who had a fear of public speaking and was completely
detached from the glamour industry. For someone like her, the path to becoming an Emcee couldn’t have been an easy one. Somehow, fate intervened and she found herself on the talent show “Zoom Anchor Hunt”. Later on, she went on to winning the title and working with Zoom TV. Since that day forth, Angela has shown no signs of stopping to take a breath.

Her portfolio include events ranging all over the spectrum – from entertainment to corporate – working with the bigwigs such as Zoom TV, Zee TV, ABP News, NDTV Profit, Reliance, Tech Mahindra, and many more. In addition, she has hosted the prestigious Dadasaheb Phalke Academy Awards. Off the entertainment field, she has also hosted Queen’s Baton Relay which is held prior to the beginning of Commonwealth Games and the Asian Athletic Championship. Her impressive work repertoire is a mile long – try more than 1500 events across the globe – and a completely different piece needs to be dedicated to just that. Her versatility is simply commendable.

The Emcee, host, or the anchor – designated rightly so – is the sole executor at these events. They are the face of it, the memory that attendants will take home with them. She says, “I love that fact that clients entrust me with the responsibility of taking care of an entire show.” Angela doesn’t take that bond of trust lightly. She constantly strives to include different elements in her routine to make an event more interactive, fun, and ultimately exceptionally entertaining. With a genuine charm and appreciation for people, it’s no surprise she is able to think on her feet and be spontaneous when required.

Angela’s zest for quest drives the explorer within. Her solo travels all over the world has vastly
contributed to her admiration of a life well-lived. A self-proclaimed adventure junkie, she believes
traveling solo is the best path to self-discovery. Sheepishly, she admits to going a tad over-board once in a while – like the last time she did 2 bungee jumps in 20 minutes! Her experiences as a traveler only add to her understanding of being a highly sought-after emcee – which is her first love. “I have traveled the world but there is no place like my stage,” she admits.

Always on the go, she is currently working on her YouTube travel channel that is slated to kick off this year. Her funnily scary video of bungee jumping from Macau Towers has 12 Million views. The vast interest in this particular video inspired her to take a leap of faith and work toward what people want – to experience adventure vicariously and forge their own journeys. Perhaps, it is rightly said that when destiny intervenes, all of our life plans tend to fly out the window. Angela Rebello can heartily attest to that. Oh so cheekily, she often likes to call herself ‘Destiny’s Child’.

For Angela, success isn’t material. According to her, “one cannot grasp success in measurement, I believe. I personally think success means to be better than what you were yesterday. It’s an on going process of learning and growing.” An anchor, emcee, model, actress, traveller – Angela dons many hats but it’s her natural affinity to be inspired and to be able to inspire others that makes up her grounded personality. Without a doubt, hard work bears fruit; with enthusiasm and determination, she keeps on venturing the steady pathway of weaving her dreams into reality.