Asha Bhosle: We made a career in a saree and two braids

Days after culminating her lockdown initiative, Asha Ki Asha, the veteran singer Asha Bhosle tells aspiring singers to focus on craft before being swayed by industrys glitz and glamour 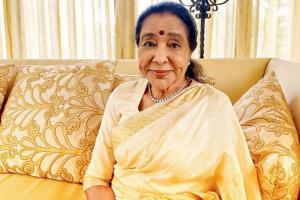 
Having watched her granddaughter interact, and make merry with her family members in USA via a video conferencing app, Asha Bhosle arrived at a conclusion. Over the years, as she climbed the ropes of success in Bollywood, she was approached by aspiring singers hoping to 'make it' in the world of cinema. With lockdown affording her the luxury of time, and technology, access to the entire country, she knew it was time to reciprocate the adulation she had received.

"We launched the Asha ki Asha initiative, asking people to send a two-minute video showcasing their singing skills. We encouraged them to send original renditions," says the veteran, who received 2,500 entries for the competition since she announced it in August.

With help from her family, she distilled the authentic renditions by sieving out karaoke performances and mimicry. "Of the ones that remained, we arrived at 200 selections, then 100, 28, 18, and finally, five. We were seeking out a voice that is good, just the way it is. [Technology] can enhance a song, but a voice must be good before it is worked on," says Bhosle, who turned to Shankar Mahadevan for help to select the final winner, Amaan Khan. "He was chosen because his voice is sweet, and unique. Usme dard tha. He sang all the songs well, including Rafi sa'ab's Aapke pehlu mein aakar ro diye, and [Mera eh] charkha of Nusrat Fateh Ali Khan sa'ab. He has a good command over Punjabi, Urdu and Hindi." Four other runners up won Rs 25,000 each.

Even though Khan took home the winning prize of R1 lakh, Bhosle says they had to abridge their list with a heavy heart. She was often reduced to tears as she watched able teenage girls sending videos shot in their modest homes, including in chawls. "We got many entries from both men and women singing ghazals. Didi's [Lata Mangeshkar] Lag ja gale, and my song with Ghulam Ali sa'ab, Sajona sa sajan, were rendered in abundance. The talent that we got to see was pleasing. Girls as young as 11 and 15 can sing beautifully. Singers from Maharashtra and UP amazed us. They had a good command over Bollywood, and other genres."

Having witnessed the growth of Bollywood, and subsequently the Indian music industry over several decades, Bhosle has been a staunch critic of the glamorisation of singers in the past few years. The development, she says, hampers an artiste from doing justice to the craft in concern. "While singing at reality shows, attention is paid to the fashion quotient, and dance. Dancing and singing have no connection with each other, then why make a singer dance? It affects the breathing, and hence a person's ability to sing. We spent our life in a saree and two braids, and made a career singing songs. I encouraged aspirants to not focus on the hairdo or clothes, and merely stand and render a track."

Next Story : Breath of fresh air