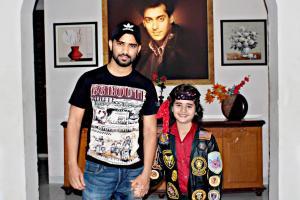 "Mere Bhaijaan" has received overwhelming response after it released. This song is one of Asif’s favourite track specially since it belongs to the "Soul full Music" genre and is dedicated to the super star Salman Khan. The song is penned by Sahil Hashmi and S Ismail and describes the love towards Salman Khan and his altruism. Mere Bhaijaan has been sung by Ahmad Shaad Safwi. It has turned out to be an instant sensation amongst the youth.

Mere Bhaijaan stars Jason, who has last seen playing Salman's younger self in the film Tubelight. Salman has a huge fan base which is not confined to any age group and especially he is loved by the children at the most. The song depicts the beautiful relation between a boy who admires Salman khan and his pure, innocent love for him.

Mere Bhaijaan is a courteous endeavour to portray the endearment of a kid who was named Salman by his parents towards his idol Salman Khan "The Superstar". The interesting thing is that he shares the same birthday as his idol which falls on December 27. The magic of his affection & craze for Salman Bhaijaan is boundless. God himself is so pleased that he endows little Salman with a beautiful compassionate heart just like Bhaijaan.

Music Director Asif Panjwani said, "This song conveys that love is bridge between you and everything. Salman Khan’s birthday is a national celebration because of his contribution to the nation in a compassionate and helpful way. He not only comes in the list of super star but also hold an appellation of social worker. So basically, this is a birthday song which is dedicated to Salman Khan and his noble deeds."

Next Story : Salman responds to reports of his collaboration with SRK, Bhansali