With the countdown to his next release Dream Girl already on, actor Ayushmann Khurrana took out time to post a pose with his real-life dream girl -- wife Tahira Kashyap 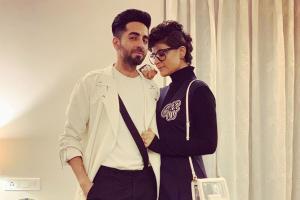 
Ayushmann Khurrana took to Instagram to post a photo of him with his wife Tahira Kashyap. In the picture, the Vicky Donor actor can be seen smiling and posing for the camera. Tahira, on the other hand, is holding on to him and looking down.

"With my #Dreamgirl @tahirakashyap", Ayushmann captioned the pic.

Tahira reposted the snapshot and wrote: "But I thought I was with mine! We as a couple believe in balancing it out. When Harish meets Dream girl. #aboutlastnight #dreamgirl."

On the work front, Ayushmann is gearing up for the release of his next film, Dream Girl. In the movie, Ayushmann can be seen playing a guy who dresses up as women characters for the local dramas. This leads him to pick up a job in a radio station which requires him to speak to the listeners in an effeminate voice! Ayushmann Khurrana's portrayal as Pooja has received accolades from his fans and peers in the industry. Last month, the makers dropped of Dream Girl has won hearts and the film's quirky plot has certainly become the talk of the town.