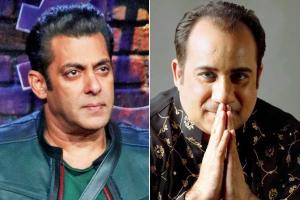 
Salman Khan has dropped Rahat Fateh Ali Khan's rendition of the Naina Lade track from his upcoming film Dabangg 3. Yesterday, the star shared the audio of the song on Twitter and wrote, "Yeh hai hamara romantic andaaz... suniye aur maze lijiye with Naina Lade (sic)." Composed by Sajid-Wajid, the song has now been sung by Javed Ali. Rahat had lent his voice to the Naina tracks in the first two outings of the franchise. Salman did a rethink to avoid controversy about having Pakistani singers rendering Bollywood tracks.

Is this a new marketing strategy by the makers to arouse further excitement among the fans, or will they release the videos later? Anyway, the film is all set to release on December 20 and fans are expecting this would be another blockbuster by Salman Khan.

Beyond the line of control

Now reports suggest that this volatile dialogue may be edited out of the final cut to avoid any further pandemonium. For the uninitiated, this film is a remake of the 1978 comedy of the same name that dealt with extra-marital relationship and infidelity. The makers have given the narrative a small-town twist and infused the plot with some heartland humour.

The chemistry of the three leads seems to have done the trick and the film is all set to release on December 6, 2019, and clash with Arjun Kapoor and Kriti Sanon’s Panipat. Which film will you watch first?

Next Story : Sooraj Pancholi on his dad's extramarital affair with Kangana Ranaut