DJ Prateek Vats aka DRIP is all set to conquer 2020!

Get ready to see DJ Prateek Vats aka DRIP conquer 2020 with a very impressive line-up! 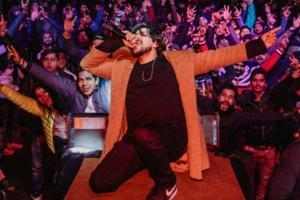 
Indian electronic music producer and DJ Prateek Vats, or more popularly known at his festivals as DRIP starts 2020 with a lineup of festivals like ELP music and food fest, Kasol Music Festival, Symaroh 2020 and the list goes on. Currently touring he spoke backstage with our team to discuss his influences in music and plans for 2020.

Interestingly, Prateek Vats (DRIP) before becoming a music producer was in Merchant Navy and keeps high regard for his previous profession. Coming from a military background his father and brother are proud soldiers and mothers a highly experienced teacher by passion.

"Even when I was sailing, I was always producing. Where ever I was sailing to I'd go and listen to the music popular there," as he puts it. In 2016 Prateek Vats joined a course for Producer/DJ at I Love Music Academy in Gurugram. And has been playing at music festivals and college festivals in different states and cities around India ever since.

Talking further about his influences and interests in music scene DRIP admiringly names ARJUN VAGALE, NUCLEYA, KSHMR, PRATEEK KUHAD, DIVINE, HARDWELL, ABOVE AND BEYOND, NINA KRAVIZ, SOLOMON, INFECTED MUSHROOM and many other particularly favorites. DRIP says the Indian scene is super crazy because of the existing talents and the ones that are about to emerge.

In the near future, DRIP plans to take some time off touring to finish his debut album shoots and recordings for which he has planned a launch tour for 2020. Blue Turtle Entertainment an enterprise of SS Group joins hand in the launch tour which is planned for 10+ cities and will go on for 3 and plus months all across India. DRIP's music shall be available worldwide on online platforms and social handles. We wish DRIP the very best for the album launch tour and pre-launch tour currently going on and continue to be a storyteller alongside.

Next Story : Kriti Sanon gets inked, calls it the start to something new!