Dr. Altintas Ahmet Ali to make his acting debut in a Bollywood film

Dr. Altintas Ahmet Ali has been treating his patients for years but to everyone's surprise, we will now see him acting too 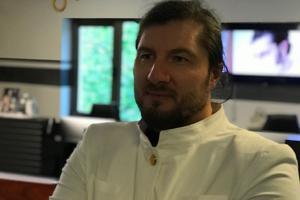 
Dr. Altintas Ahmet Ali has been treating his patients for years but to everyone's surprise, we will now see him acting too! Yes, the ace plastic surgeon will soon be seen in a Bollywood film.

If you are thinking that he is doing a scene in a Bollywood film or playing a cameo then you are mistaken!!! Dr. Ali will star as the main lead in a film. Surprised more??? No need to. Ali has been a doctor by profession but only a few know that he is a born actor. From his early school days to college life, he was a fine actor but he left his passion to make a career in medicals.

Altintas has now decided to achieve his dreams and he has been approached by a leading Bollywood director for a film. He has already given his nod to the script of the film and will formally announce it.

When asked about the same, Dr. Altintas said, "Yes, I will soon be titled as Doctor turned Actor and I am excited about it. I have read the script and to keep it simple as it is the debut film, I will be playing a doctor but this time on reel."

When asked about how he decided to quit acting and move into medicals, he said, "I never had any connections in the cinema industry. My family believed that it will not be easy to take my passion as a profession. They convinced me to study medicals. With half-hearted, I did the same but somewhere, I missed my acting days in college and school desperately. Now I have made a name in my profession so I thought why not to pursue acting."

When asked will he now quit his practice as a doctor? He said, "How can a doctor skip his duties and responsibilities? I will give time to my patients after the shootings. I have spent a good number of years into the medical field so there is no chance of now quitting it."

Dr. Altintas, a cosmetic surgeon, is also very famous on social media platforms. He has thousands of followers on Instagram where you can be seen him facing camera on various occasions.

On the film front, the film is slated to go on floors this December and is slated for next year's release. The film will be shot majorly in India and some scenes will be shot in Philippines as well.

Next Story : Bollywood remembers the sacrifices of the martyrs on 26/11 anniversary