Now, he is all set to bring out India's first World War movie on the big screen. It would be a biopic on the legendary tale of Victoria Cross Gabbar Singh Negi, a World War I hero who sacrificed his life at the age of 19 in 1915 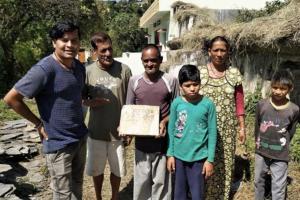 
Following the grand success of his music album, short films and web series, Ex Commando (NSG) Lakshan Singh Bisht (popularly known as Lucky Bisht) is all set to produce India's first World War movie on legendry ' Gabbar Singh Negi' whose heroic act is little known to the people of the country. After taking voluntary retirement of services in 2015, his sense of service continued in another form with his entry into Bollywood. Coming from a family of servicemen since several generations, Lucky Bisht embarks on a new journey which manifests his patriotism more vigorously.

After being relieved from the Army, in 2018, Bisht founded his own production house under the banner of 'Lucky Commando Films' with offices in Haldwani and Mumbai. He is presently working on several short films. Lucky has so far produced movie 'Niyati Chakra' in (2018), the short movie 'Kon Saab..? in (2018) short movie '3d Night' in (2018) feature movie O Maya in (2018) and web series of 'Super Laundeys' in (2019). Now, he is all set to bring out India's first World War movie on the big screen. It would be a biopic on the legendary tale of Victoria Cross Gabbar Singh Negi, a World War I hero who sacrificed his life at the age of 19 in 1915.

Negi, a resident of Garhwal (Tehri district) lost his life while fighting World War I. He stunned the Britishers with his act of bravery, valour and fearlessness and hence was given the highest gallantry award of the British Honour system -'Victoria Cross'-posthumously.

"People know very little about World War I hero Negi and he had received the highest gallantry award of the world ' Victoria Cross' and Garhwal Regiment was given unprecedented special privilege to keep sword on the right side as a tribute to him. I resist telling very interesting social aspects related to 'Negi at this stage.' However, I feel that people must know that he was the youngest (19 years) World War I hero who left his marriage ceremony incomplete to go to the war and when his bride came to know his heroic act and the highest sacrifice, she decided to remain unmarried till her life," said Bisht who had purchased all rights and NOC of 'Negi' from the family of the War Hero and the war movie is expected to hit the big screen in 2022.

Coming from an army family background Lucky joined Indian army just in 17 years of age with his passion to serve the country and completed his Commando training of 2.5 years in Israel. He was later inducted in elite force National Security Guard (NSG). Bisht received the award of India's Best NSG Commando in 2009. While serving in NSG, he had been personal security officer of many VIP including Narendra Modi, then Chief Minister of Gujarat. He also served as security men LK Ladwani, Rajnath Singh, and Chandra Babu Naidu among others. She resigned from his job in 2015 and started his carrier in Bollywood in 2016. And by 2018, he became a well known Bollywood figure. There was no looking back since then and his sense of service for the nation reached a new high.
"I was a personal Security officer of Chandra Babu Naidu, Telgu Desham Chief and Former Chief Minister of Andhra Pradesh. I came in close contact with Junior NTR, a leading actor of South India along with other leading actors there. From there I landed in Bollywood and a new journey began. I find films a strong medium to convey social messages and human angle stories," he added.

Bisht's production house aims at delivering the best quality content with the social message within it. Expressing his disappointment at the current scenario where stories of great Indian heroes remain confined in books and never come out, he said, "Being a soldier himself, he feels a huge responsibility on his shoulders to bring out the stories of bravery and sacrifice that lie hidden deep down in the folds of papers."

"Discussions are on with leading production houses of Europe and the USA. Also, we are trying to get leading names for the cast and are aiming to realise the film by August 2022," he said.

Lucky Commando Films recently made its first music video "Ehsaas", based on the theme - 'No acid attacks'. He will come up with several other short films, web series and feature films in the future. His popular project is a short film "Niyati Chakra", based in Varanasi. It is written and directed by Santosh Ojha, an alumnus of FTII, Pune. A young team has produced a short film, "3-D Nights", which aimed at fighting the social challenge of drug addiction in India. "3-D Nights" was produced by Lucky Bisht and Kashvi Production. A short film, "Kaun Saab", backed by Lucky, raises a question on how dreadful criminals and terrorists are given VIP treatment in jail.

Lucky Bisht's New Web Series 'Pithoragarh' will be released on Netflix soon "We have got 'in Principal' approval from NETFLIX. Agreement of Association was to be signed on March 27 this year but it was delayed due to lockdown. We will soon start shooting and hopefully, the audience would get to see this fantastic human angle story soon on a leading OTT platform. During the lockdown, we have got our screenplay and other back-end works completed," Bisht informed.

Though Lucky Bisht has been connecting with several state governments for support and association with his War Movie and other productions such as web series, however, he is expecting big support from his home state Uttarkhand on Victoria Cross ' Gabbar Singh Negi.'

"The Uttarakhand government has invited us to showcase the film so that they can decide on how they can promote the film to spread its message to a larger audience," he added.

Ex Commando Bisht has forayed into Bollywood with heroic stories of soldiers losing their sheen by getting lost in the passage of time. He aims to serve such legendary and human stories to the masses across the globe with his production house.