'My father helped people get into the army, that's also Nepotism'

Vidyut Jammwal, in an exclusive interaction with Mid-day India, talks about the insider vs outsider debate, his take on Nepotism, and how things will change in Bollywood! 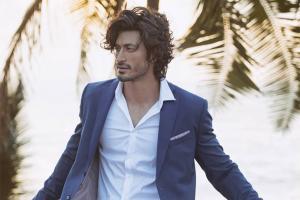 
The debate around Nepotism and insider vs outsider continues to be a part of interviews and social media statuses. Vidyut Jammwal, also an outsider, has also spoken about this debate and has a rather different take on it. In an interview with Supriya Nair of mid-day.com, he spoke about a lot of things, from how journalists need to be more sincere and sensible to how things can change in the industry.

He also stated, "If you're my friend and your daughter wants to be an actor, I'll do anything for her, why will I be a friend otherwise, but I won't stop somebody else. That's the only thing I would request people, be kind and give equal opportunity. There's a lot of talent." And did he ever face any kind of injustice in his career?

He said, "Who said you won't get wet if you go into the sea? You are a master of fitness, can you pause your breath for a day? No, I can't, I'm like everyone. I've been inside the sea and I've got wet. My grandfathers and my uncle were in the army, and my uncle sacrificed his life in the 1971 war, yet my relatives have joined the army." He continued, "Just by thinking that you are not going to be successful in Bollywood, I won't stop. I'll still try by best, and that's the idea behind it.

Talking about the pros and cons of films directly streaming on the OTT platform, Jammwal stated, "This is the need of the hour, most importantly, when the time is right, things happen. And this is the right time for this thing to happen. I'm so happy that people will watch films without being told by a critic."

He added, "His criticism or her criticism that it's bad, everyone has a different taste, let him taste a sweet first whether he likes it or not. So for me, the pro is, and there are only pros, that people will not have to listen to people. And that's the coolest thing about it. They will open in cities we don't talk about much, they will open in countries we don't even mention so much."

Was it because of the negative reviews by critics that people didn't go to watch his films on any of the occasions? He stated, "I can tell you about Junglee, it did not make 100 crores that it was supposed to do, but it's the number one rated movie on OTT, on any platform. And whether I travel to Hong Kong or I travel to Rishikesh, kids love Junglee. So I personally believe if the nation has liked it, how come they didn't go to the theaters."

He continued, "So I don't know what could be the reason, sometimes it's the time also but I really appreciate the fact that people loved it." Recently, seven films were announced to stream on OTT (Disney Plus Hotstar) and Jammwal tweeted about the snub two of them had to face. How long will it take for things to change?

Jammwal spoke, "Am I Bejan Daruwala that I would know. How would I know? Change is inevitable and we are witnessing it. Change will not happen the way we thought it will happen. It's happening and I'm hoping it'll be a great change. The thing we need to start with is the journalist. Their questions have to change, they have to come up with ideas for the actors."

He added, "I blame the journalists to quite an extent because they don't come prepared. They don't know where they wanted to go, they just want to ask an actor and then sensationalize it. We need to be much more sincere and kind, it's not only us, them, the most important people are the journalists, they know everybody's mindset."

He continued, "I know what my mother sitting in England or my brother sitting in Gurgaon thinks because they think what the media has fed them, my opinion might not be the same. So who has done this to them, I haven't told them, it's the media, they need to be much more sincere and sensible."

Is social media also to blame since people have been talking a lot on the platform and changing narratives? He answered, "We didn't even know that Instagram and Facebook would become so big. This is how change happens, now there will be rules, then there will be methodologies, there will he techniques to not do certain things. Things have just started."

Next Story : A gift of clean air and water for Juhi Chawla's son Arjun on his bday