After more than a year of togetherness, Farhan Akhtar and Shibani Dandekar seems to have decided to take the next step 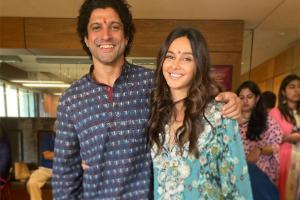 
Farhan Akhtar and Shibani Dandekar do not shy away from the media or the public glare to profess their love for each other. Their Instagram account is all about pictures filled with Public Display of Affection (PDA), and their cryptic captions leave their fans scratching heads to decode it.

After more than a year of togetherness, Farhan Akhtar and Shibani Dandekar have decided to take the next step. According to a report in Filmfare, the duo is planning a February or March wedding next year. The report further states that Shibani has been accepted by Farhan's daughters from his ex-wife Adhuna Bhabani, and have bonded well with them. So if everything goes right, we might hear wedding bells soon.

In fact, it seems, Shibani has bonded well with Farhan's parents too. Shibani dropped into Farhan's residence on the occasion of Diwali and celebrated the festival with his family. Their Diwali celebrations were quiet and simple. It seems the couple wasn't in the mood to indulge in any sort of grandeur or glitter.

The Zindagi Milegi Na Dobara actor started dating Dandekar almost a year-and-a-half ago. Later, they started sharing each other's photos on their social media accounts. Farhan was earlier married to Adhuna Bhabani, with whom he has two daughters - Shakya and Akira. Shibani Dandekar is a model-turned-VJ and has participated in reality shows such as Khatron Ke Khiladi and Jhalak Dikhla Ja.

On the work front, Farhan was last seen in Shonali Bose's The Sky Is Pink, co-starring Priyanka Chopra, Zaira Wasim, and Rohit Saraf. The film opened to a positive response from critics but underperformed at the box office. He will next star in Rakeysh Omprakash Mehra's Toofan, a boxing drama releasing on October 2, 2020.