Gunjan Saxena: The Kargil Girl: Rrefreshing stills from the film

In one picture, Janhvi Kapoor is seen donned in the uniform, while the other two pictures have adorable moments shared by Kapoor with on-screen father Pankaj Tripathi. 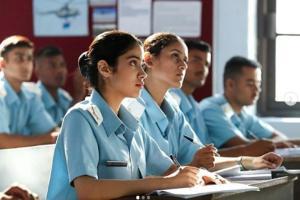 
Hours after dropping the breath-taking trailer of her upcoming film 'Gunjan Saxena: The Kargil Girl', actor Janhvi Kapoor on Saturday shared some stills from the flick on social media. The forthcoming film chronicles the journey of the first Indian Air Force (IAF) lady officer -- Gunjan Saxena -- to enter a war zone, which will be portrayed by Janhvi in the film.

The 23-year-old actor on Instagram shared three refreshing stills from the movie. In one picture, the actor is seen donned in the uniform, while the other two pictures have adorable moments shared by Kapoor with on-screen father Pankaj Tripathi.

She kept the caption minimal by writing "Gunju".

The trailer of her much-anticipated movie has been receiving a vast, positive response from netizens, and from Bollywood celebrities alike.

The trailer chronicles the journey of an IAF officer, essayed by Janhvi who takes on a mission to make her father proud and carve a niche for herself in the Armed Forces. The video introduced its main cast and how a frail-looking girl with a passion for flying ended up flying rescue and recce missions for the IAF during the Kargil. As the trailer progresses, Gunjan (Janhvi) seems to find that to accomplish her dream is not easy as she is reminded at every point that she is a woman and weak because of it. Pankaj Tripathi who is seen essaying the role of Janhvi's father in the film is the one who gives wings to her aspirations and supports her.

The stupendous trailer documents the life of Flight Lieutenant Gunjan Saxena, who made history when she became the first Indian woman in combat during the Kargil War.

Saxena, who is one of the first female pilots to fly in combat, played an important role in rescuing injured soldiers during the Kargil War in 1999 and was awarded the gallantry Shaurya Vir Award for displaying courage during the war.

The upcoming biopic is being produced by Dharma Productions and Zee Studios and will release on Netflix on August 12.