Hina Khan bags 'one of a kind' Indo-Hollywood film

Hina Khan has taken her next step in the international market by signing an Indo-Hollywood film, which is based on H.G. Wells' novel The Country of the Blind 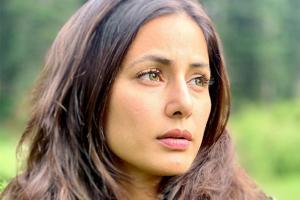 
Actress Hina Khan, who made her debut at the Cannes Film Festival this year, has taken her next step in the international market by signing an Indo-Hollywood film, which is based on H.G. Wells' novel "The Country of the Blind".

The film titled "Country of Blind" is being directed by Rahat Kazmi and will be shot in the Himalayas. It is a story set in the 1800s about the inhabitants of a valley who have no vision yet are living a fulfilled life without any attachment to the outside world. Hina will be seen playing the character of a blind woman who belongs to the valley.

"'Country of Blind' was the first script that Rahat had narrated to me, even before 'Lines'. And I knew I had to do this one," Hina told IANS.

The film is being co-produced by Rahat Kazmi Films and Tariq Khan Productions along with Hiro's Faar Better Films and Turn Key Films (US).

Hina had attended the Cannes fest in May this year for the first look launch event of her film "Lines".

"This project ('Country of Blind') was signed on before Cannes happened, but yes we definitely got international producers on board after my Cannes appearance," said the "Kasautii Zindagii Kay" actress.

"Whatever we have done in this project is a benchmark. Everything in this film is one of a kind. It's always better to lead by example rather than follow. 'Country of Blind' has given our entire team this chance to create something that has never been seen before," she added.

It is being shot in English and Hindi.

"Each language, each culture, each dialect has its own nuances. Initially, it takes a little time to reprogramme oneself, but it's been fabulous. Anyway, the English language is more about Shakespearian English and nowadays, we are all hooked to Netflix and Hollywood, so it's not a foreign terrain," she said when asked about shooting in English.

Much before entering the film world, Hina was known to the Indian audience as Akshara from "Yeh Rishta Kya Kehlata Hai". She then shed her "good bahu" image by participating in the reality show "Bigg Boss". She again won hearts with her Komolika role in the popular show "Kasautii Zindagii Kay".

So, are films her focus now?

"The focus is on challenging work. The actor inside me is happy and satisfied when I begin my day looking forward to doing something new and end it knowing what I did yesterday, isn't the same as what I am going to be doing tomorrow.

"My focus is to grow as an actor and keep entertaining my audience with variations they have never seen me doing before," said Hina.