Resurrection - Jaago Aur Jiyo comes as a breath of fresh air that brings hope, peace and teaches a beautiful reason for leading a fruitful life 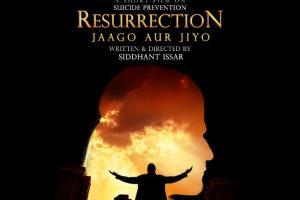 How far will you go to stay positive and hopeful in the worst times of your life? In the ongoing lockdown and pandemic due to Corona virus, many have lost their jobs, assets and much more. Especially, people working in the creative and entertainment industry have declared themselves bankrupt. According to WHO survey, India has the maximum suicide rate amongst the Asian countries. Writer-director Siddhant Issar, who is also a renowned theatre actor brings an intriguing tale of life and death titled Resurrection- Jaago Aur Jiyo.

Vedika (Kanishka Soni), an upcoming actress, is undergoing depression due to lack of money, work, her abusive relationship and her missing cat princess. After her own family refuses to help, she decides to end her life by committing suicide. Enters, a young man (Siddhant Issar), who saves her from it and grants her all wishes. What happens next forms the rest of the crux. Who is this young man? Why would he save Vedika? Would she believe him?

In such adverse times, Resurrection - Jaago Aur Jiyo comes as a breath of fresh air that brings hope, peace and teaches a beautiful reason for leading a fruitful life. Writer-director Siddhant Issar has hit the right chord with this film which also marks his screen debut. Known for his various spectacular theatre performances, he is seen in an unusual avatar which is interesting and commendable. He has excelled as an actor, we hope we get to see more of him on the big screen too. Actress Kanishka Soni is watchable along with the rest of the cast.

Since the whole film is shot during the lockdown with the limited resources, zero unit or crew and less shoot equipment the film might not be esthetically very rich and fancy but this attempt to make a film with a social message is a winning point for the makers.