Jawaani Jaaneman: Saif and Alaya's film nothing new but something fun

Saif Ali Khan, Tabu, and Alaya F's Jawaani Jaaneman is both cliched and charming, and some lively and inspired moments save the day! 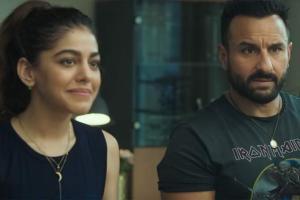 When the first time I heard about Jawaani Jaaneman, I thought this would be a love story of an ageing man and a young girl, and a lady of his age would be the third bead in the rosary. But the trailer was the big surprise. This isn't a love triangle, this is the tale of a father who's unaware of his daughter and a mother who has been lost in her own world ever since the couple had Sambhog, as they say in the film.

Nitin Kakkar is one of the most underrated and unfairly overlooked filmmakers currently. His films, barring the terrific Filmistaan, may serve the same template we have seen in Hindi Cinema before, he has his own voice and style of communicating the same things differently. And Jawaani Jaaneman is no less! It has Saif Ali Khan do everything he did in Cocktail, it focuses on the carelessness and callousness of a father, something we saw in Shaadi Ke Side Effects, and a child who's longing for her father's reciprocal, ala Salman Khan in Yeh Hai Jalwa and Aditya Narayan in Jab Pyaar Kisise Hota Hai.

More than the narrative, it's the characters that help a film find its identity. We have met the people we see in Jawaani Jaaneman before, but they still feel real, human and absolutely hilarious in many moments. The film's narrative would crackle even more if you discover it without watching the trailer. The first time we meet Tia, a superb Alaya F, Khan's Jaswinder Singh aka Jazz gets too close for comfort. He takes her home and begins to drop off his clothes before being hit by lightning, the girl is his daughter!

Kakkar has a fine understanding of emotions and how to blend them with inspired moments of mirth. Look at how Jazz reacts when he gets to know he isn't just a father but also about to become a grandfather. Or that fantastically performed scene where his family lands up at his house unannounced and the chaos and confusion that follows. It can be argued the leading man has done all of this before, but the swag is still on, as he says that he lives with his swag. There are plenty of jokes on his age, which Ajay Devgn also tackled in De De Pyaar De, but they land better here.

Watch the trailer of Jawaani Jaaneman:

What also lands is the character of Tabu, who shows what a good actor can do even with a small part. She's a hippie, and to be frank, a psycho. She believes in the power of meditation but Jazz feels she's an addict. Khan and Tabu definitely deserve a backstory of how they met, had Sambhog, and what made her the idiosyncratic she is. And of course, Alaya F charms you with her innocence and likability. Although lines about Barsaat and Dhoop sound too precocious and unimaginable from her mouth.

We also get to meet Rhea, Kubbra Sait in fine form, our hero's best friend who understands him more than he does. She confides in him, but in a scene, he unleashes his pervertedness on her too, but Kakkar handles an otherwise problematic scene with care. There are some gratuitous bits too, particularly the character of Chunky Panday, playing a richer and more suave version of Aakhri Pasta. It seems he has swallowed his most iconic role's accent. His scene with Khan in the hospital is straight out of Shaadi Ke Side Effects, reflecting how crucial a family is.

Jawaani Jaaneman oscillates between cliched and charming, but once you enter into the world of its characters, you begin to care for them, especially Tia and Rhea. Some lovely scenes and inspired moments save the day for this family-comedy that never stoops to melodrama. But as you exit the cinemas, before you can smile at what you saw, you wonder why they didn't give a longer role to Tabu!

Next Story : Akshay Kumar shoots for Discovery in Karnataka's Bandipur