Kangana Ranaut visited her grandmother to provide an update on the celebrations. Aksht got engaged to Rohtak-based Ritu Sangwan last November. 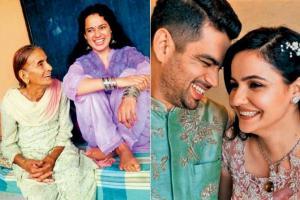 
In between taking on Bollywood biggies, Kangana Ranaut is also planning brother Aksht's wedding and sending invites. She visited her grandmother to provide an update on the celebrations. Aksht got engaged to Rohtak-based Ritu Sangwan last November.

Kangana Ranaut's social media team shared stunning pictures from their engagement ceremony hosted in November 2019. This isn't the first Bollywood wedding which will be hosted amid the pandemic. Popular actor Rana Dagubatti is all set to tie the knot with his girlfriend Miheeka in August.

Speaking about Kangana Ranaut, the actress, on the professional front, will be next seen in Thalaivi and Dhaakad.

'Thalaivi' is being helmed by AL Vijay and has been written by 'Baahubali' and 'Manikarnika' writer KV Vijayendra Prasad and 'The Dirty Picture' and 'Once Upon a Time in Mumbai' writer Rajat Arora. The movie was scheduled to hit theatres on June 26, 2020, but would not be able to see the light of the day owing to the shuttering of movie halls due to coronavirus outbreak in the country.

In an interview with mid-day, the team of Kangana Ranaut revealed how they are planning to shoot the last leg of the film. "In the climax, Kangana will be seen stepping out of the legislative assembly as a crowd awaits her. The makers wish to film the sequence on a large scale with 350 people. However, the current guidelines suggest that only 33 per cent of the original crew strength can be present. Since the makers intend to shoot the remaining portions in a start-to-finish schedule, they have decided to hold off the entire schedule until it is safe to shoot with a crowd," shared a source.

Bhagyashree, who also plays a pivotal role in the film, shared in a media interaction, "I play a key role in the film and my character brings about a turning point in 'Thalaivi's life. Kangana and I have a lot of scenes together, and the entire team loved our on-screen chemistry. It was fun working with her because she is a fantastic artiste, who puts a lot into her performances. It was great to get back to the set after a very long time."

Next Story : Kiran Joneja: We have to review our outlook towards mental health