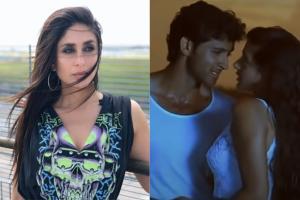 
It was the year 2000 when Bollywood saw four major debuts- Hrithik Roshan and Ameesha Patel in Kaho Naa... Pyaar Hai, and Abhishek Bachchan and Kareena Kapoor Khan in Refugee. However, in case you were unaware, Kareena Kapoor Khan was supposed to debut with Roshan and not Bachchan. But she opted out of the film due to reasons best known to her.

And now in an interview with Rajeev Masand, the actress spoke about her decision and what made her do so. This is what she stated, "Honestly, at that time nobody really calculated and nobody really knew whether it was my parents, my mother, or me, I don't know if anybody weighed pros and cons. It was just what I thought was right. There was never really that kind of calculation. I also believe in destiny; what's meant to happen is going to happen."

She added, "Of course, I went on to do so many films with Hrithik after that. We did like four or five films together, and I think that Refugee was just perfect. I got a chance to be slightly non-commercial. I somehow felt that it was more suited for me at that time." On January 14, when Kaho Naa... Pyaar Hai completed 20 years, the director of the film Rakesh Roshan also spoke about why Kareena Kapoor Khan left the film.

Interacting with The Quint, the filmmaker said, "Kareena's mother Babita, who I have a lot of respect for, said, 'Don't begin with a song, she's not ready. Start with dialogues.' Babita was a little adamant about it. So I said, 'This way I cannot work because tomorrow you might say, don't do this, don't do that. I think it's better we part ways because we are good friends.' So we parted ways."

Roshan and Khan did four films in a span of two years- Yaadein, Kabhi Khushi Kabhie Gham, Mujhse Dosti Karoge, and Main Prem Ki Diwani Hoon. Kareena, who completed two decades in the Hindi film industry, took to her Instagram account to express what she feels like and what the first day was of shoot felt like. Have a look right here:

She was also seen in films like Veere Di Wedding, Angrezi Medium, and Good Newwz. She's now gearing up for Laal Singh Chaddha and Takht. Takht will be Khan's second collaboration with Karan Johar where he directs the actress. This period drama, which is slated to release on December 24, 2021, also stars Anil Kapoor, Ranveer Singh, Vicky Kaushal, Alia Bhatt, Bhumi Pednekar, and Janhvi Kapoor.

Also Read: Kareena Kapoor Khan On Jayaraj And Bennix's Death: As A Society, We Must Continue To Speak

Next Story : What are the benefits of NOT being a star kid? Adah Sharma shares video