Khali Bali - A horror comedy with a superstar crew 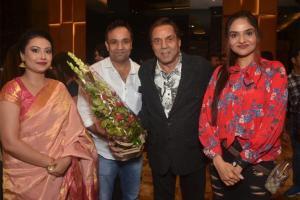 Dhamrendra with the team of the upcoming film, Khali Bali


The Indian film industry has successfully entertained Indian audiences across generations with multiple genres. However one genre that has failed to strike a chord atleast with the hindi film industry apart from a few projects as an exception is horror. While horror comedy as a genre has rarely been even attempted.

At times when the film industry is choosing to create big budget films only with proven recipe or for meagre entertainment and masala content, lets leave it to someone like Kamal Kishor Mishra to pull off a special one. The producer is excited to share that 'Khali Bali', his upcoming horror comedy produced under the One Entertainment Films banner is ready for release.

The cast and the genre adds to the excitement around the project for the masses and the expectations are high with this one. We enquired with Kamal about his choice and if he believed it was a risk and he promptly replied, "Cinema is an experience where the creator and the crew shared an experience with the audience. They laugh, cry and enjoy together. Experiment is in many ways the soul of cinema as the audiences collectively evolve with time and thw creators should not be left lagging behind. Also, the crew of this project boasts of hevay experience. We look forward to entertaining the masses with the release of Khali Bali."

With this the producer signed off and we promise to share more about this as soon as we hear about it.

Next Story : 'Irrfan was very special or else why would I remember him every day?'