Minissha Lamba's exotic vacation will fill you with wanderlust

Minissha Lamba shared a few moments from her vacation in Turkey, and we're sure that she's making the most of her stay there. 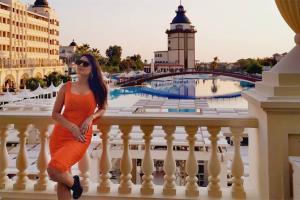 
Minissha Lamba is currently in Turkey and she's making the most of her stay there. The actress shared pictures from her vacation on her Instagram account, and they will surely make you want to visit the country.

In the first picture from her travel diaries, the Bachna Ae Haseeno actress seems lost in her own thoughts as she is clicked in a candid pose. Donning an orange dress with black sunglasses, the actress looks beautiful.

From the exotic Titanic Mardan Palace, Minissha took us to the quiet lanes of Istanbul. Here, she posed in front of a historic structure, asking her fans for the perfect caption. She opted for a white floral off-shoulder dress and black leggings for the outing.

Her next destination was Hagia Sophia, a historic museum in the capital city. She was mesmerised by the historical artefacts, which was quite is evident from the caption. Uploading a picture from the museum, she wrote, "Even after so many centuries... After seeing so many modern megastructures, one is awed by what the human mind created eons ago."

Next, she moved towards the Bosporus coast to take a dip and soak herself in the sun. The former Bigg Boss contestant fell in love with the place. Uploading a picture of herself on the banks of the river, she wrote: "The most beautiful river I have ever sat across."

In the next picture, she gave her followers an option to caption her picture. She wrote, "Caption this plssssssss...... Fun.. Whacky ones will be appreciated... And of course, the winner gets caption rights!"

She was last seen in two television serials - Tenali Rama in which she played the character of the Assassin Chandrakala, a Vishkanya, who has poisonous blood, and in romantic sitcom Internet Wala Love.

Next Story : Kartik Aaryan and Janhvi Kapoor wrap the Punjab schedule of Dostana 2