Pal Pal Dil Ke Pass is that ancient Bollywood, bread-butter, young-romance, that were sure-fire, star-career launchers, back in the '80s/'90s. The film stars Karan Deol and Sahher Bambba 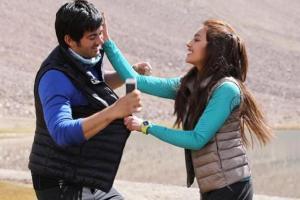 He calls her, "Ms Sethi." She calls him, "Mr Sehgal." How sweet. You sorta feel sorry for this lead-girl (Sahher Bambba) on a Manali trek with the local, rock-climbing tour-guide dude (Karan Deol) in this film though. Her chief concern, while going through severe altitude-sickness, is that she doesn't have her eye-liners on, to save the day.

"Eye-liner saans lene jaisa hota hai. Eye-liner nahin, toh aankhein hi nahin (Eye-liner to the eyes is like breathing to the rest of the body. No eye-liner equals having no eyes)," she says. Don't roll your eyes. This is the film's most profound one-liner. You live and learn.

That said, you feel for this girl further. All her life what she really wanted to pursue was professional singing. And then, on an open-mic night, she performed. Her boyfriend at the time laughed as she sang.

She'd barely begun the opening stanza of the Kishore Kumar, RD Burman song from Blackmail, originally picturised on Dharmendra, Rakhee: Pal Pal Dil Ke Paas… And then she had to wrap up the track, and her life's dreams.

Up in the mountains, with only her young rappelling-instructor by her side, she gets to fulfill her ambition—singing that ditty this film is named after. Her voice is lovely. As is this movie's title-track, with the same first-line on loop, sung by Arijit Singh.

So have we solved this film's essential conflict? Hell, no. The filmmakers have to be find one in the first place. Here's the issue. This is that ancient Bollywood, bread-butter, young-romance, that were sure-fire, star-career launchers, back in the '80s/'90s.

Which would be what, exactly? The rich/poor-girl, having to eventually get together with the poor/rich-boy (gender/income-status interchangeable), as all hell breaks loose in the interim - at home, and elsewhere -while the lilting, ting, ting, ting, ting (set to the soft background score) plays throughout.

The problem, over the past decade-and-half or so, is that nobody buys this shizzle anymore, given that in upper-class, urban settings such as this, one assumes, if miya-biwi raazi, then who cares whether mummy or papa-raazi.

So then? Abhi kya? Well, first, seriously update technology; this is 2019, instructs Sunny Deol, as he did with the thriller Ghayal Once Again (2016), his second time out as a filmmaker (he made his directorial debut with Dillagi in 1999, starring himself, alongside brother, Bobby).

So what if the story's the same. The girl's a popular vlogger/social-media influencer. The villain is no more the 'khadoos baap', but a 'raees, politician maa ki bagdi hui aulaad' from Delhi - the girl's ex. He threatens her with revenge-porn. She could out him on social-media. How Insta-age, and uber-cool.

With this façade in place, there's much room for Daddy Deol to pull all stops, flush out his purse, open up some stunning locales/vistas, for Son Deol's Himalayan debut, flinging him from mountain-tops, getting him to race against fast cars in Greater Noida's F1 tracks. And of course, on popular demand, getting him to groan the angry-young-man, "Aaaaaaa," before he squashes villains to pulp, right inside their posh den.

He's a sweet, quiet li'l boy; looks a lot like his father from certain camera-angles as well. He's giving it his best. So is the audience, one hopes. Hey, and don't feel sorry for the audience, okay. They're still getting some good education on eye-liners, and other one-liners, if nothing else. Feel slightly sorry for the kid. I'm sure he'll survive (this film, and otherwise). And there's always good stuff in Manali to see him through.

Next Story : 'We made Chhichhore for a purpose that's way bigger than box-office'