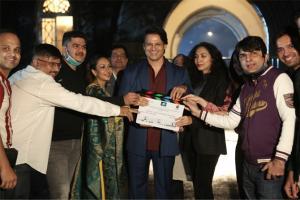 In July, Mandiraa Entertainemnt and Vivek Anand Oberoi's Oberoi Mega Entertainment announced their second collaboration titled Rosie: The Saffron Chapter. The horror-thriller is based on the real-life story of the sudden disappearance of woman named Rosie from Gurugram, who was an employee at a BPO company. After hosting a nation-wide hunt to zero down on a new talent who would play the titular character, the makers roped in newbie Palak Tiwari.

The film, which also stars Oberoi, went on floors on the 18th of December.

The first schedule of the film is currently taking place in Pune. The first day of shoot involved a night sequence with Tiwari giving the mahurat shot. Following the Pune schedule, the team will be starting their second schedule in Mumbai.

Shooting amidst the new normal is no cakewalk but the cast and the crew of Rosie: The Saffron Chapter is adhering to strict Covid-19 guidelines. The sets are being sanitised at regular intervals and the crew has been requested to wear masks, gloves, face shields and PPE kits at all times. As per a mandate by the production houses, everyone entering the film set has to undergo a Swab test to rule out any possibility of a health hazard.

Talking about kick-starting the shoot, producer, Vivek Anand Oberoi, says, "It was a very special moment for me and a special film to me .  I knew that I had to be present on the first day of the shoot of Rosie: The Saffron Chapter. Being a producer is teaching me a lot. It is new for me but I am enjoying every bit of it and really looking forward . Besides, I was waiting to get back to a film set .

We are sticking to all the precautionary measures to keep all health risks at bay. I am hopeful that we will achieve what we have set out to."

In a similar vein, producer Prerna V Arora says, "We knew that shooting during these tough times would not be easy but then, we made sure that we adhere to every guideline to make our sets a safe place for the cast and the crew. Rosie: The Saffron Chapter is our passion project.. Pari was my first horror film which released in 2018 and is very close to my heart and I am very proud of that film.. after which Rosie reminded me of a very popular television show called "honi unhoni" which my grand mother used to tell me about and it always stayed on my mind until I found this script which is based on real time incident and its very overwhelming fr me .

Also I am really very very honoured and happy to collaborate with k sera sera group .

K Sera Sera Group is delighted to be a part of Rosie The Saffron Chapter. It was an overwhelming experience to finally kickstart a project in this ongoing pandemic. I am truly humbled and honoured to be working with the most remarkably talented Mr Vivek Anand Oberoi and Ms Prerna V Arora along with Mandiraa Entertainment. This is a true story that is so exceptional and gripping that i cannot wait for what we believe is going to be an incredible journey ahead.

Excited to begin the shoot, director, Vishal Mishra, shares, "It is an assurance when you have established names like Vivek Anand Oberoi and Prerna V Arora backing you. It has only been a day but Palak has already left us impressed. She is the heart and soul of our film and she is extremely hard working and sincere. We will be shooting in Pune for a while and will then continue with the second schedule in Mumbai. It is said that working with talented people brings out the best from you and this film is a shining example of that."

Next Story : Rolling along with Sameer Ali Khan