Priyank to reunite with singer Aastha Gill for another smashing hit?

After the success of his high school teenage drama Punch beat and a music single paired opposite Neha Kakkar, Priyank is supposedly gearing up for yet another collaboration with the hit maker Aastha Gill 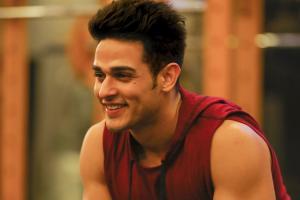 
Reality TV star and actor Priyank Sharma is on a roll. After the success of his high school teenage drama Punch beat & a hit music single paired opposite Neha Kakkar, the chocolate boy is supposedly gearing up for yet another collaboration with the hitmaker Aastha Gill.

A massive female fan following post his stint in dating reality show, Priyank rose to overnight fame & appeared on the biggest reality show Bigg Boss as a celebrity & had a long run on the show. Post his exit, there has been no looking back for the actor making him a sought after name for music single. The actor collaborated with DJ Waley Babu singer Aastha Gill for an out and out party anthem Buzz that crossed a whopping 199 Million views. Priyank and Aastha's chemistry in the song was unmatched.

Apparently in a cryptic post on his photo-sharing app Priyank announced another collaboration with the Aastha Gill. The Buzz team reunited & cut a cake celebrating one year to the blockbuster song. He captioned, "Celebrating one year of buzzing with the same team exactly after one year! Missed @badboyshah bhai . BUZZING AGAIN SOON!"

Looks like the two are getting together for another smashing number.

Next Story : Sanya Malhotra makes time for her passion, amidst hectic schedules