Producer and Distributor Mehmood Ali has a big surprise for all the cinema lovers- Don Cinema, an OTT app with a variety of films! 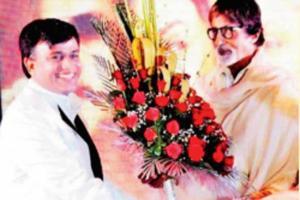 
In the age of web-driven content working wonders with the audiences in India, Producer/Distributor Mehmood Ali has launched his very own OTT app DON Cinema. With DON Cinema, Mehmood Ali promises to bring you an enormous variety of films from all over the world, not just Bollywood and Hollywood. Mehmood Ali launched his company Pen N Camera International in 2004 and turned distributor in 2007. In a career spanning 15 years, he has made his company one of the leading film distribution houses in the industry today, having its presence in Malaysia, London, and many more countries.

Mr. Ali owns DON Infotainment, in partnership with Satish Kumar who is a very well- known land banker from Delhi and a wiz in the Finance sector, and Dr. Ali Irani, a very established physiotherapist with the Indian Cricket Team, also being the doctor for Shah Rukh Khan. In a candid chat with Midday, he told us more about DON Cinema and some of his uniquely conceptualized shows on the app.

"The next generation is going completely digital; so it was a no-brainer that I should tap the digital viewing market as well. The idea for having my own OTT platform, however, stemmed from various factors. The main reason was that I became aware of a lot of directors and producers who wanted to show their content on the web. However, Netflix had many norms and restrictions, and ALTBalaji has established a fixed genre for its content. So you see, these creators were not able to put their content on the air very easily.

That's why I established DON Cinema," he said. "I understand that every OTT platform has a show or some broadcast that is its USP. For instance, there is IPL for Hotstar, Sacred Games for Netflix, and many such. DON Cinema's USP is that is for all common people who want to enjoy high-quality and entertaining content on the Internet. That is why our subscription deals are a steal in comparison to the variety of films and shows we're offering."

A revolutionary concept presented by DON Cinema is OMT –ONLINE MOVIE THEATRE. Mr. Ali told us that under this, DON Cinema will air all brand new movies, and viewers can have access to these at an unbelievable price of RE.1 PER MOVIE. "With DON Cinema, I'm constantly brainstorming as to what kind of innovative viewing experience I can give to the audiences, and OMT is one such innovation that I'm sure people will love. We already have over 88,000 subscriptions on the app within just a month of introducing it, so I can say the motivation to innovate is pretty high!" Mr. Ali said, smilingly.

Talking about the movie library at DON Cinema, Mr. Ali said, "I have around 2000 movies from all over the world. I have tied up with the very prominent and reputed Farabi Cinema Foundation in Iran and I have 800 movies, including the famous Majid Majidi's films, that are internationally acclaimed Iranian classics. Apart from that, I am also showcasing Brazilian, Caribbean, Korean, British, Russian and of course, Hollywood movies. These foreign movies will be dubbed in
Indian languages for our viewers to have the best and the most comfortable experience of watching fine films that they won't get to see anywhere else."

By now, it is pretty evident that Mehmood Ali is extremely passionate about cinema himself. When we asked him the same, he agreed wholeheartedly and said, "Of course, I'm a movie buff and I love to watch quality cinema. I aim to deliver the same with DON Cinema and keep the love for movies alive. Profit is a completely secondary motive. My priority is to give the world cinema to the audiences. We have Web Talkies LLC USA as our technology partner to provide a flawless streaming experience to our viewers on DON Cinema."

DON Cinema features the very popular and viral show TOKERS HOUSE, which is a reality show consisting of many popular Tiktok stars, YouTubers, and influencers. The show follows a format similar to Bigg Boss and is already a hit among
youngsters. Another offering from Mehmood Ali is the upcoming show WRITERTAINMENT. "Just like Indian Idol searches for the best singer, Writertainment will do a global search for the best writers our young generation has – writers that
think out of the box and have groundbreaking thoughts and ideas," he said.

WRITERTAINMENT is set to launch in April 2020. But, before that, in March, Mr. Ali is coming up with TOKERS CRICKET LEAGUE, a cricket tournament with Tiktokers, influencers and our beloved Indian cricketers. "We already have Mr. Kapil Dev and Mr. Mohammad Azharuddin on board and we're going to conduct the event in the Maldives. It's going to be a super fun event and I promise that everyone will enjoy watching it."

Next Story : URI: The Surgical Strike: One year later, the Josh is still High!