Sanya Malhotra: Hair, make-up helped me to feel and be like Anupama

sanya Malhotra, who essays the role of Shakuntala Devis daughter Anupama Banerji in the upcoming biographical film, talks about how she got into her character. 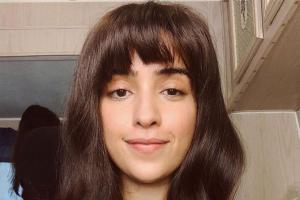 
Biographical drama film Shakuntala Devi is to see a release on the 31st of July with Vidya Balan essaying the role of Shakuntala Devi and Sanya Malhotra essaying the role of her daughter, Anupama Banerji. To mold themselves into characters, actors often adhere to the character's physical appearance to really look and feel like the character and actress Sanya Malhotra had done the same!

In a recent interview when she was asked how much does just a physical attribute transport her into a character, Sanya Malhotra said, "A lot! It is so important as I think 60-70% is only the hair, make-up, and costumes and 30-40% is the psyche of the character and however, you want the character to look like. I think Dangal really helped, it was a great example and it was tried and tested."

The actress further added" Cutting the hair and actually going through that whole process of training helped me a lot to get into Babita's shoes and to look and feel like a wrestler. Similarly, with Shakuntala Devi, I think the hair and the make-up helped me tremendously to feel and be like Anupama Banerji.

Sanya continued "I don't take the credit at all as the credit goes to our costume HOD Niharika Basim Khan and Make-up team which is Natasha Mathias. They have done a brilliant job and it's because of them I could play the character."

The upcoming film Shakuntala Devi is directed by Anu Menon and produced by Sony Pictures Networks Productions and Vikram Malhotra. The film also stars Jisshu Sengupta and Amit Sadh in prominent roles. Tune into Amazon Prime Video on the 31st of July to watch the film!

Also read: Five Things That Prove Shakuntala Devi Was Way Ahead Of Her Time

Next Story : Sushant Singh Rajput's sister: Let's stand together for the truth