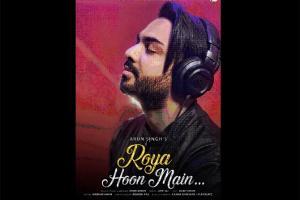 Bollywood and love songs go hand in hand. A movie buff cannot imagine things without these two. Giving a new meaning to the concept of romance, many singers and filmmakers for that matter have restored our faith in love. Yes, real soulmates exist and that's what singer "Arun Singh" is making the world believe in with his soothing compositions and songs. The Dubai-based singer on June 17 launched his new music video titled 'Roya Hoon Main' on his YouTube channel.

The teaser of the song which was released a day before created a lot of curiosity about the song. The melodious track is sung written and composed by Arun Singh & the music of the song is given by Atif Ali. The song is presented by Record Label "Virtual Planet Music, Virtual Planet Music" is one of the Leading Indian Record Label which manages many renowned artists like Gajendra Verma, Mohit Gaur, Rapperiya Balam, Haiyat khan and many more. Besides Arun, the music video also features Sandrine and the song is very captivating which will grow on your mind. It is its lyrics which have done its magic and the song is extremely pleasant to hear with having an emotional quotient in it.

When asked about how the idea of music video came in mind, Arun said, "It was just a thought to make a song for all the lovers. It is very common but when you are truly in love and things just don't work, it becomes difficult to forget your loved one. The song is for all those people who have loved and lost and are still strong." Besides this, Singh even expressed his joy about the song garnering more than 250K views in less than 48 hours.

Singh started his career in 2005 from Kanpur and later moved to Mumbai in 2007. He later learnt Indian classical music from Shri. Murtaza Mustafa, the son of legendary Ustad Ghulam Mustafa Khan Sahab. Arun is extremely happy with the love he has been receiving for his YouTube channel. "It is the baby steps towards one big goal. Let's achieve one goal at a time", he added. He has released many other songs on his channel including 'Chhukar Mujhe', 'Jeena Tere Bin' among others. The talented singer has also released covers of many Bollywood songs on his channel. "Roya Hoon Main" is released by " Virtual Planet Music" on all OTT and Streaming platforms worldwide.