Talent and perseverance can make you reach any destination in the world, yes, this is proved by Anusheel Chakrabarty 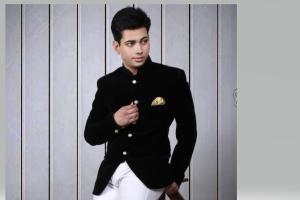 Talent and perseverance can make you reach any destination in the world,yes! this is proved by Anusheel Chakrabarty Actor. According to Media Hindustan (https://mediahindustan.com/) National and International Karate Champion, born on 23 December 1993 in Port Blair,Andaman Islands. Anusheel who graduated from Shobhit University, did his schooling from Blair International School is inspired by Shah Rukh Khan. In January 2020, there was the premier of the music album "Kisi Ki Yaad Mein" at Andheri's Zee Preview Theater, the album featured Anusheel Chakrabarty in the lead. This music video is produced by Sanjay Kumar and his mother Advocate Sheela Chakrabarty.

This is Anusheel Chakrabarty's second music album, before he has worked in the 'Sandesh' music video released by Zee Music Company which was his debut in 2018. Its story is that an Indian boy falls in love with a Russian girl.

He came to Mumbai in 2010, just to see how the city is like. Anusheel got his acting education in 2017 from Bollywood Actor Anupam Kher's Acting Training Institute “Actors Prepares”. His acting guru is Siddharth Sengar, TV and film personality, who further enhanced his acting. In addition to acting, Anusheel is also master in Karate.He started practicing Karate in the year 2004 under his father Shihan Anup Chakraborty,5th Dan Black Belt (South Africa).

He is also credited with winning 1 Gold Medal and 1 Bronze Medal in the 2010 World Cup Karate Tournament held at Cape Town,South Africa. On 26th January,2011 he received the Lieutenant Governor's Commendation Award,for his excellent performance in the field of Karate.

Anusheel also got the opportunity to represent his motherland India in many countries like USA, South Africa, Thailand, Singapore, Japan, China, Bangladesh etc. He fought in Asia Open Karate Tournament in 2014, International Open Karate Tournament 2015 and participated in International Friendship Karate Tournament 2017 with the Andaman Team,he has trained at World Headquarters of IKO Kyokushinkaikan (IKO Honbu) ,Mitsumine Camp under Kyokushin World Champions and K1 Kickboxing Champion Shihan Francisco Filho in Japan. In 2012 he participated in the All India Open Kyokushin Karate Tournament,which he won and became the youngest national champion ever at just 18 years of age. In 2014, he organised his 1st Karate Championships,for that he was said to be the youngest Andaman State Karate tournament organizer.

In view of his achievements, he is also known as the Karate Icon of Andaman and Nicobar Islands.He participated in the Island Beauty Contest held at Port Blair in 2015 and eventually won the title of Mr. Andaman.

In "Kisi Ki Yaad", which the audience and music lovers liked very much, he showed through music albums how love and pain in personal life affect people's heart. It reached over 1 million views on Youtube. Shooting of this album has been done in many areas of Alibag beach, Mumbai such as Madh Islands, Powai, Hiranandani and Hajiali scenes are very captivating.

In a conversation with Anusheel Chakrabarty, he said that this is his second music album, but it is completely different from the first album. In this, he has got a lot of opportunity to learn the nuances of acting.

On the occasion of the launch of the music album, many well-known artists from the TV and film world attended, leading among them - Birbal, Dilip Sen, Sunil Pal, Banwarilal Jhol etc. Everyone praised Anusheel’s acting skills in this music video and wished “Kisi Ki Yaad Mein” all success.

Music video Co-producer Sheela Chakraborty (Advocate) and Anusheel's Karate Guru, his father Anup Chakrabarty (Advocate) said that since childhood, his son Anusheel had a keen interest in karate and acting.Seeing his passion for acting, he supported his son and will also launch Anusheel on the big screen in the coming time. He will soon appear in another music video. Last but not least, his late Great Aunt Rama greatly supported him, she also wanted to see him as an Actor.

Next Story : Radhika Madan: When we speak up for Rhea, we're not disrespecting SSR