The Hidden Strike Review: Every Indian must watch the film

After watching The Hidden Strike, you will have immense respect for the Indian Army and our country. 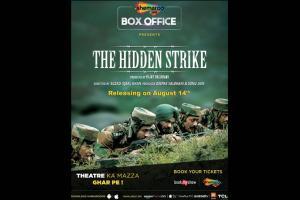 The Hidden Strike is the story of an Army Officer who goes on a secret mission with his best men across the border with the permission of his high command and is eventually successful. The story is a satire on the counter attack though they have all the latest ammunition. The movie may flare up your rage as an Indian seeing how our soldiers lose their lives in the blind attacks. There is only a sympathetic affirmation from the higher officials for some action.

The locations give a real feel of the Warfield. Music, graphics, storyline and star cast are spellbinding and give a serious blow to Nepotism as the new artists have given their outstanding performances. Film artist Deepraj Rana, Mir Sarvar, Jimmy Sharma, Sanjay Singh, Lakha Lakhvinder, Vedita Pratap Singh and the theatre artists from Delhi Bihar Gujarat, Punjab, Haryana, Jammu & kashmir had done justice with their characters. The deep anguish reflected in this movie moves our hearts against the loss of life of our real heroes makes this a Must watch movie for Indians.


Music is ethereal and echoes in our hearts. The story and screenplay are mesmerizing. The Director Suzad Iqbal Khan has fairly dealt with the storyline also writers Abhinash Singh Chib & Sagar Jha has fairly with the story screenplay and dialogues This movie proved to be a milestone for the Producer Vijay Valbhani & Sonu Jain. The film produced under the banner of Crystal Movies. Actor Jimmy Sharma proved his acting skill he left everyone emotional through his power packed performance.

The real life of an army man is portrayed in 'The Hidden Strike', where country comes before self, duty comes before family. Their commitment, loyalty and valour are those elements which would stick you to the screens till the end.

After watching the movie, you would have immense respect for the Indian Army and our country.