Tiger Shroff: Dance-off with Hrithik Roshan will be tough

Currently filming his next with Hrithik Roshan, Tiger Shroff says it is challenging to match up to his screen idol 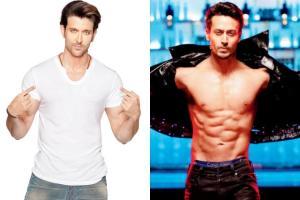 
With Student Of The Year 2 behind him, Tiger Shroff has turned his attention to his yet-untitled next with Hrithik Roshan. Thrilled as he is to share screen space with his idol on the Siddharth Anand-directed venture, the youngster admits that joining Roshan on the film's set is an intimidating experience.

"I have to be on my toes and give my best all the time because I am working with someone who is perfect in every facet. We have yet to shoot for the dance-off, which is going to be the toughest part," says Shroff, arguably the only actor who can match Roshan's dancing skills.

Also Read: Dadar's Chitra Cinema to shut down; SOTY 2 to be its last day last show

While details about the movie are being kept under wraps, it is heard that the film — also featuring Vaani Kapoor as the female lead — sees Shroff play a mentee to Roshan. Off-screen too, the dynamics are not very different. "I keep observing his craft. It makes me realise that I have so much room for improvement. Be it the dialogues, expressions, dance or action, he is meticulous with everything he does. Shooting with him is like going to school and returning with homework. It's an honour to be working with him because whatever I am today, is a reflection of him."

Given their shared love for dance and fitness, fans have often drawn parallels between the two actors. However, the young actor asserts he is no match for his idol. "I don't think I can ever compete with him. It's like playing Mortal Combat — while one player ticks off all the boxes, the other player is someone like me, average. From action to dance, I have to match up to him, and that is the biggest challenge."

Next Story : From Bharat to Kyrgyzstan; makers plan a worldwide release