On his official Instagram account, Varun Dhawan shared photographs with David Dhawan from the sets of Coolie No 1. 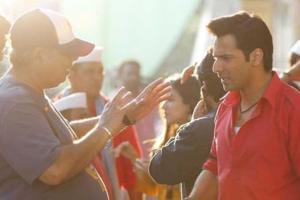 
Bollywood actor Varun Dhawan has revealed the 'main brief' which was given to him by his father and Director David Dhawan during the shooting of his upcoming film Coolie No 1. On his official Instagram account, Varun Dhawan shared photographs with David Dhawan from the sets of the film.

The actor wrote, "Conviction was the main brief of the Director while doing every scene in #COOLIENO1. For some reason whenever I'm listening to a scene in my head I take off to this imaginary land... Woke up with a big smile today all because of the amount of love I received yesterday."

Varun's social media post comes a day after the release of the trailer of Coolie No 1, a film which stars Sara Ali Khan opposite him. While a section of netizens criticised Varun alleging he had overacted in the film while some fans compared him with Govinda. The actor also received love and appreciation from his fans.

Coolie No 1 is a remake of the 1995 original film of the same name that David Dhawan made with actors Govinda and Karisma Kapoor. The new film, also featuring ace comedians Jaaved Jaaferi, Rajpal Yadav and Johnny Lever, is the 45th directorial venture of David Dhawan.

Next Story : Yami thanks her extended family for making her birthday memorable