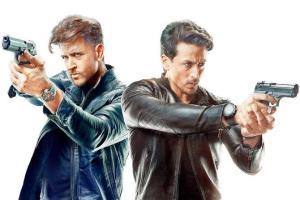 
Hrithik Roshan, Tiger Shroff, and Vaani Kapoor's film War has had a stronghold in its second week as well. On the second Tuesday of the second week, the action film collected Rs 4.20 crore nett (Hindi - 3.90 Cr and Tamil and Telugu - 0.30 Cr)! The total collections of the action spectacle now stand at a staggering 280.60 crore nett.

Out of these films, three films are Yash Raj Films.

Starring two of the biggest action superstars in the history of Indian cinema, Hrithik Roshan and Tiger Shroff, the total collection of this action entertainer makes it a blockbuster at the box office!

Produced by YRF, War is receiving unanimous love and appreciation from critics and audiences alike for delivering a never seen before action spectacle and a superb story with twists and turns that keeps audiences at the edge of their seats till the end.

On its opening day, War created history as it collected Rs 53.35 crore nett - the biggest ever opening for a Hindi film. It also registered the highest first week of all time and has crossed Rs 350 crore at the global box office.