After delivering back to back workout videos Hrithik Roshan has added another one where he is seen indulging in Incline Dumbbell press, an exercise routine 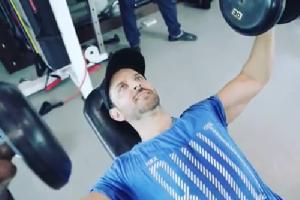 
One of the sexiest men in the world, Hrithik Roshan is yet again treating his fans with another intense workout video. After delivering back to back workout videos the actor has added another one where he is seen indulging in Incline Dumbbell press, an exercise routine.

The exercise is designed to target the front of your shoulders and upper chest. Hrithik Roshan is the perfect example of workout goals for his fans and followers. The actor perfectly manages his gym routines in spite of his hectic shoot schedules.

Sharing the workout video on his Instagram handle, Hrithik Roshan wrote, "You'll never get there. That place u wanna reach so bad. U won't ever get there. But don't stop trying u fool. That's the fun. And I guess the rule has changed from "faaa" to "fudge". ZMR. 30lbs. 2.10min. 6 reps."

The workout video shows Hrithik Roshan pushing his limits and giving workout goals to his fans. Hrithik Roshan who has earlier delivered stellar performances in films like Jodha Akbar and Guzaarish will be slipping into the character of a mathematician for his upcoming film, Super 30. The film is based on the life of mathematician Anand Kumar who grooms 30 students for the competitive exam of IIT-JEE. The film is all set to release on July 26, 2019.

Also read: Here's why Hrithik Roshan took a walk to the sets of Super 30

Next Story : Deepika Padukone wraps up Delhi schedule of her upcoming Chhapaak