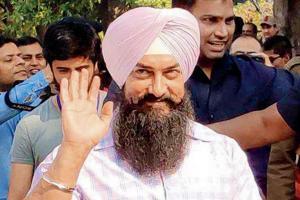 
An array of videos of Aamir Khan — in character in and as Laal Singh Chaddha — jogging across South Indian cities, have been bringing a smile to the faces of cinephiles. However, for the actor, the experience has been far from enjoyable.

Khan, who had previously gained 20 kilos to film portions of the Forrest Gump (1994) remake, had been jogging 10 to 13 kilometres each day to shoot for the remaining sequences. So exhaustive was the physical demand of the leg that Khan, 54, had to pull it off on a steady dose of painkillers.

A source close to the production team tells mid-day, "Aamir sir was shooting for a special sequence where he had to run across the country. The physical exertion was a lot due to the constant running, but we were on a fixed schedule. Aamir sir did not want to stop shooting since his bearded look had to be maintained throughout the sequence. So, he would consume painkillers and continue filming. This shooting schedule was on for around 10 days."

Khan has already been earning praise for his appearance in the movie, a remake of the Tom Hanks classic, and, in a bid to lend authenticity to the final product, the makers shot at real locations. "Aamir covered the whole of India for this portion, running in the heartlands of states in the North and South. He ended the shoot in Bengaluru," says the source.

Next Story : Sab Kushal Mangal movie review: Much that's good; but, this concept?