Anshuman Jha and Zarine are a part of "Hum Bhi Akele, Tum Bhi Akele", a mainstream Bollywood film with a gay man and a lesbian woman leading the narrative 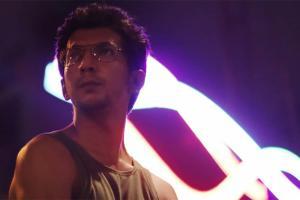 
Anshuman Jha, who features with Zarine Khan in a unique story of love with two central homosexual characters, says he wanted to steer clear from the conventional "Bollywoodisation" of such a role.

Anshuman and Zarine are a part of "Hum Bhi Akele, Tum Bhi Akele", a mainstream Bollywood film with a gay man and a lesbian woman leading the narrative. It is being directed by Harish Vyas of "Angrezi Mein Kehte Hain" fame.

Of the film, Anshuman said in a statement: "'Hum Bhi Akele Tum Bhi Akele' is an effort to create romantic drama in a manner not seen in cinematic history by way of two homosexual protagonists of the opposite sex. The prep on this film has been the hardest of my career thus far.

Also Read: Anshuman Jha: Did not venture out when in uniform while shooting for No Fathers In Kashmir

"The gay community has suffered so much repression in being judged by the society that I as a straight, heterosexual male - with the kind of privileges I get in this world - my job was to pay attention, listen and do justice to Veer in the most sensitive manner possible - without falling into the conventional Bollywoodisation of playing a gay man. Love and friendship are universal and this film celebrates love in friendship".

The film has already begun in Delhi and will soon be shot in Dharamsala and Mumbai. It will release on Valentine's Day 2020.

Vyas said he wrote the film with Anshuman in mind as Veer, while Zarine auditioned her way into the "unconventional" film.

Next Story : Siddhant Chaturvedi opens up on his fitness routine