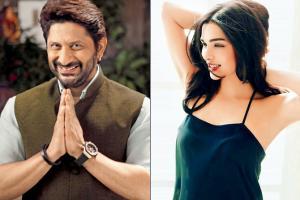 
In her last visit to India in 2016, Pakistani actor Sara Loren found herself in the midst of the furore that resulted from the Uri attacks. mid-day had then reported that Loren was among the Pak artistes to have been given a 48-hour ultimatum to leave the country. Then in India to fulfill her professional commitments, she continues to struggle to enter Mumbai, where she hopes to promote her next, Fraud Saiyaan.

"I wish I could join my team members in India at this moment," Loren tells mid-day, adding, "Sitting on a sofa, having coffee and watching my [film's] song on repeat is wonderful. I will hopefully join my team before the film releases."

Shooting for the Arshad Warsi starrer was done in August 2016, before the diktat on Pak artistes working in India was imposed. Pointing out that the development could affect the film since Loren is his leading lady - and Warsi's wife - producer Prakash Jha says, "It is sad to see such a talented actor being denied the right to promote her film. She has been in and out of the visa office for days."

A source close to the production says Loren's dual citizenship affords her the right to apply for a visa from Dubai. "She had applied for a visa four times, and has now done so from Dubai. Sara owns property there. But, her prior stint in Pakistan seems to be a hindrance."

Next Story : Paresh Rawal: No one can play Narendra Modi better than me