A sculptor from Asansol, Sukanto Roy, has created a wax statue of the late Sushant Singh Rajput and its quite a work of art! 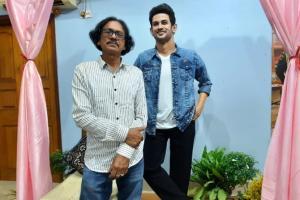 
Sushant Singh Rajput had a massive fan following across the country. One such diehard fan, an artist from Asansol, Sukanto Roy, has immortalised his favourite Bollywood star into a life-size wax statue. And we must say, it's a pretty good likeness!

Sukanto Roy told ANI, "I liked him (Rajput) a lot. It is unfortunate that he passed away. In his memory, I have made this statue for my museum. However, if Sushant's family requests for his statue, I will make a new one."

West Bengal: Sukanto Roy, a sculptor from Asansol has created a wax statue of late actor Sushant Singh Rajput. He says, "I liked him a lot, it is sad that he passed away. I have made this statue for my museum. However, if his family requests for his statue I'll make a new one." pic.twitter.com/H9DxEDwcbN

The statue of SSR features him wearing a pair of black jeans, a white t-shirt and a denim jacket. His signature grin is in full display as Roy stands next to him for a click. Sukanto Roy has also crafted wax statues of other celebrities like Amitabh Bachchan and Virat Kohli among others.

Sushant Singh Rajput was found dead at his Bandra residence on June 14. His girlfriend Rhea Chakraborty, and her brother Showik, are currently under arrest as part of the investigation in the case. The death is being investigated by the CBI, Narcotics Control Bureau and Enforcement Directorate.

Next Story : Urmila Matondkar thanks 'real people of India' for support