As makers retain Ayushmann Khurrana's version of the female voice in Dream Girl, the actor on perfecting the tricky job 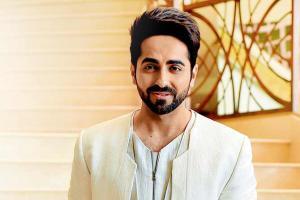 
He has had little time to celebrate his National Award win, but Ayushmann Khurrana is not complaining — he is only too happy to spend most of his Sunday inside a studio, doing last-minute dubbing for Dream Girl, the trailer of which releases today. The upcoming offering sees him as a small-town guy whose ability to speak in a female voice leads to hilarious results.

While director Raaj Shaandilyaa had originally planned to have a woman dub for the part, so impressed was he with Khurrana's version that he decided to retain it in the film. "I had to deliver 25 per cent of my dialogues in a woman's voice. Since I come from a radio background, it's easier for me to modulate my voice. I have spent years behind the mic, mimicking different people. Raaj had given me the references of a few men, who prank people by talking like a woman. I studied those videos extensively," says Khurrana.

He agrees that the job was easier said than done. Prepping for weeks before the film, which also stars Nushrat Bharucha, went on floors, he adds, "The biggest challenge was to crack the right note. As a guy, I have a natural [deep] baritone and that makes it difficult to sound convincing as a woman." Tell him that taking on unconventional roles has become a habit for him, and he laughs, "To transition between voices was challenging, but it wasn't one bit exhausting. I am naturally drawn to different characters, so this was an adventure."

Next Story : Nitin, Salman on playing mentors: Deciphering their skills is our job