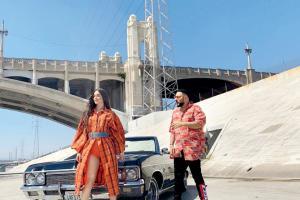 Bollywood rapper Badshah is set to unveil his upcoming single Paagal Hai, which launches Playboy model Rose Romero. She has previously featured in the works of J Balvin and Daddy Yankee.

"Rose adds oomph to the video. When I saw her in other videos, I was blown away with the attitude she exudes," says the rapper, who cast Romero on the recommendation of director Marlon Pena following an interaction with him in LA. "I am glad that I took his suggestion. Rose has a hint of an Indian look, hence, we feel she will be loved by fans in the country," says the rapper, also citing the model's height as a bonus for the track that features her alongside him.

Having previously made his love for fashion evident, the rapper is often spotted sporting the biggest international brands during public outings. This track, we hear, is almost a tribute to all things fashionable for the rapper. "I believe fashion is an important part of my personality. [The brands I've sported in the song] are ones that are my favourite."

Next Story : Kareena Kapoor's cop-look from Angrezi Medium is out; see pictures