It's almost as if Bala has been designed to clear every headspace and leg/elbow room for the leading man Ayushmann Khurrana to spread his wings and fly. And boy, does he shine! 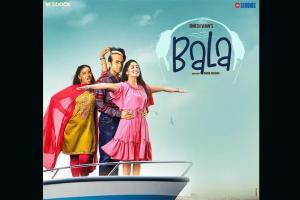 To start with, you know there's a great script playing out on the screen before you (credited to the hit TV show Taarak Mehta Ka Oolta Chashma writer, Niren Bhatt) when, as an audience, you find yourself strangely developing empathy, even for the lead female character (Yami Gautam, in such fine form).

She is so vain and fame-hungry as a small-town Tik Tok star that for her looks, selfies, likes and followers matter more than love, marriage, real life, or real relationships. You'd otherwise feel sorry for such a floozy character. Or find her incredibly funny. There's that as well. Yet, for all her flaws, you know where she's coming from. And which is a pretty warm place still.

This movie itself is coming from the heart of North India. Which is true for so many films starring Ayushmann Khurrana in particular, but Hindi films in general, that Bollywood is increasingly becoming that fine umbilical cord connecting metropolitan audiences to their Middle India roots, in the most entertaining and endearing ways.

This one's set in Kanpur-Lucknow in Uttar Pradesh (both being only a few hours apart). The 'lallantaap' local tongue and muffat dialogues are to die for. As is the ensemble cast on display (Saurabh Shukla, Seema Pahwa et al). Surely these deep interiors of India, in all its sunshine and swagger, are most fun watched on screen, than actually walked on street!

The only person not fitting in with the film's realism as well is perhaps actor Bhumi Pednekar. Don't get me wrong, she's excellent as a performer, no doubt— playing a dark-skinned female activist, out to smash the society's pigmentation problem to smithereens. We're all for actors taking on every kind of job, whether they physically fit the part or not.

Yet, there's something about tanning fair skin with boot-polish. Doubt if the art of make-up has mastered this yet. It inevitably stands out as jarringly fake. As was the case with Hrithik Roshan in Super 30, but for some reason not as much with Ranveer Singh in Gully Boy.

That said, make no mistake, this film isn't so much about Kanpur, kaala-potu make-up as it's about Khurrana, and Khurrana alone, right at the centre—belting out mimicry, from Dev Anand, SRK to Big B; going from an over-confident, sakth small-town launda, to an under-confident wuss, and then back again—all in a few minutes flat.

Watch the trailer of Bala:

It's almost as if the film has been designed to clear every headspace and leg/elbow room for the leading man Ayushmann to spread his wings and soar. And boy, does he shine—perhaps outshining anything he's done in the mainstream space so far.

He plays a prematurely balding young man, whose self-confidence if not his entire sense of self seems hinged on to the "lehraate baal" on his head, the loss of which throws him out of whack, turning this wacky film into a minor tragedy of sorts. The central idea isn't particularly novel.

We had the film Ujda Chaman (remake of Kannada pic Ondu Motteya Kathe) on the same subject release last week. If you want to know how one can make two completely different movies from the same thought, I suggest you watch writers Salim-Javed's Zanjeer and Yaadon Ki Baraat, back-to-back!

Better still; catch Ujda and Bala few days after each other (as I, along with other reviewers, did). This is when you truly appreciate how this film flies with a theme, adding to it such tender love, and care, along with punch lines, reflecting on the times we live in, marvelously navigating through pop-culture—whether through Tik Tok, dab and floss (dance) moves, Thanos , Murad, or Captain America's long under-cut pompadour hair!

There's so much layer—giving this the touch of the mainstream entertainer. The talent to pull this off with ease lies with svery few. Director Amar Kaushik (Stree) is certainly one of them—allowing this low/medium budget movie the legs to travel across theatres, with people rightly excited, both on their way in, and their way out. Sure you feel the protagonist's pain. Can that be mixed with much joy? Hell, yeah. Enjoy!