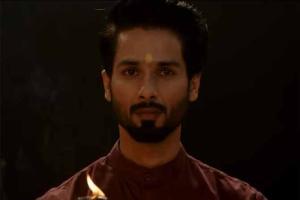 Shahid Kapoor in a still from the song. Picture Courtesy: YouTube


After giving us some soulfully melodious tracks and funky foot-tapping numbers, the makers of Batti Gul Meter Chalu have released a new song Har Har Gange. The new track strikes an emotional chord with the audience, as it executes the guilt and grief of Shahid Kapoor's character reminiscing about old memories with his friend, Divyendu Sharma. Crooned by Arijit Singh, Har Har Gange is composed by Sachet-Parampara, and the lyrics are written by Siddharth-Garima.

The characters - Shahid Kapoor and Shraddha Kapoor learned Pahaadi language – Kumaoni and Garhwali, to get its authenticity. While talking about it to mid-day, Narayan Singh said, "When you watch movies in regional languages like Marathi and Punjabi, you understand it because you've heard them before. But, you have never heard these languages, so, you may find it difficult to understand. Yet, our film is a Bollywood film; one created in Hindi. We have only used two to three words like takiya kalaam, bal and thehra from other languages. This was done to add the required flavour."

In many of his interviews, Shahid Kapoor has also claimed that Batti Gul Meter Chalu is a very special film for him. The film is shot in Tehri, Rishikesh, Dehradun, and Mussoorie.

Batti Gul Meter Chalu is a social drama based on the struggles of a common man against the power distribution companies over exorbitant electricity bills. Produced by Bhushan Kumar, Krishan Kumar, Shree Narayan Singh, Nitin Chandrachud, Kusum Arora and Nishant Pitti, the film is set to release on September 21.