Boney Kapoor: Vidya's role is a powerful one in Pink remake 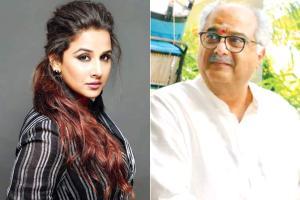 
The remake of Pink hitting closer to home for Boney Kapoor since it furthers a desire harboured by his late actor-wife Sridevi, the producer is leaving no stone unturned to make the offering in accordance with the tastes of consumers of Tamil cinema. While news of Vidya Balan playing a cameo in the offering hit headlines, Kapoor tells mid-day that the actor, in fact, plays a vital role in the film.

"I [wouldn't call it] a special appearance. There are certain changes that the director [H Vinoth] has incorporated to suit the Tamil market, and Vidya's character has been accordingly written," Kapoor says of his offering that went on floors on December 14 2018. Set to see South star Ajith — who worked with Sridevi in English Vinglish (2012) — essay the part played by Amitabh Bachchan, the film, Kapoor says, is eyeing a May release. "Ajith suggested remaking Pink in Tamil to her [Sridevi], and she immediately agreed."

A source from the trade circles promises that the Tamil version is distanced from the original. "Kirti Kulhari and Andrea Tariang's roles will be played by South actors. Vidya's role is a powerful one. She is fond of Boney, and immediately came aboard when he approached her," says the source. It has also been suggested that leading lady Taapsee Pannu's role will be played by Nazriya Nazim. The film will also apparently feature Rangaraj Pandey.

Next Story : 'Ask Govinda how often he inquired about my dad's health'