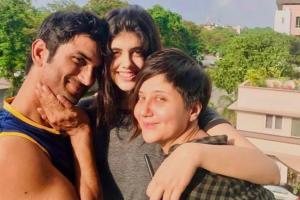 
Did you know actress Swastika Mukherjee has worked with Sushant Singh Rajput in two films? The Bengali actress recently worked with the late actor in Dil Bechara, and previously in the mystery action-thriller film Detective Byomkesh Bakshy! While Sushant played the titular character in the film, Swastika played the role of Angoori Devi, something that Sushant would continue calling her.

Speaking to Pinkvilla, Swastika Mukherjee reminisced about working with Sushant Singh Rajput in two films. She shares, "I feel I'm the only heroine who's worked with Sushant twice. I kept telling him our stars are aligned. My first big film was with him, my second big Hindi film is also with him."

She adds, "Sushant would never refer to me as Swastika. I don't remember him calling me that. He would always call me Angoori or Angoori Devi. But the Sushant from Byomkesh was different from Sushant in Dil Bechara. Back then, he had just started in films. During Dil Bechara, he had already established himself as a star."

Sushant was one of those actor who always took risks, claims Swastika. "He built an entire career with several risks, whether it's Byomkesh, or a Sonchiriya, they are not the stereotypical big films that stars would do. But he always managed to excel in every form," she says.

The Mumbai Cutting actress remembers Sushant as someone who was never a negative person. She says, "He was very flamboyant, had a lot of energy and he was an avid book reader. In his vanity van in Jamshedpur, he had more books than costumes or make-up. I walked inside and saw those huge books on mathematics and astronomy."