Bollywood actress Esha Deol, who turned 34 on Monday, celebrated her birthday with husband Bharat Takhtani and close friends. She took to Twitter to share a picture of the celebration. Check it out! 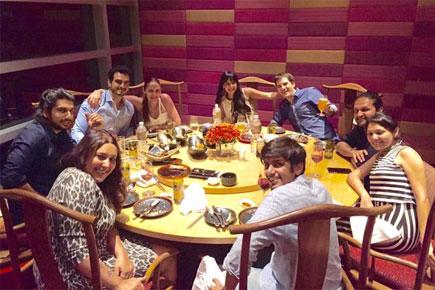 Esha Deol took to Twitter to thank her fans for the birthday wishes and shared a picture of the celebration.

Esha made her Bollywood debut opposite Aftab Shivdasani in 'Koi Mere Dil Se Poochhe' in 2002 and rose to popularity with the action-drama 'Dhoom'.

The 'Just Married' actress made a comeback of sorts with 'Tell Me O Kkhuda' which was directed by her mother Hema Malini. Incidentally, Hema's debut film as a director was 'Dil Aashna Hai' in 1992 which starred superstar Shah Rukh Khan, who shares his birthday with Esha.

Next Story : Spotted: Mukesh Khanna at an event